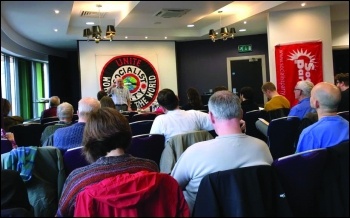 The Socialist Party Wales conference opened in Cardiff with an emotional minute's applause for the contribution of Beth Roper, chair of Cardiff Young Socialists, who died in tragic circumstances in December. Beth epitomised all that was best in the new generation of fighters who have joined the Socialist Party in Wales and are preparing for the battles ahead.

Hannah Sell, Socialist Party deputy general secretary, opened the conference discussion on 'Where Britain is going', and pointed to the huge class struggles that will open up in 2019. While the 'Brexit fog' had obscured the big class divisions in society, the anger against austerity could explode into big battles this year.

The key word at the conference this year was 'prepare', and Socialist Party Wales is certainly preparing for these battles. Above all, it means preparing politically, with clear ideas on how to fight austerity and the attacks of employers.

The position that the Socialist Party has as the unofficial left opposition to the right-wing trade union leaders in Wales will be invaluable in the struggles ahead. Socialist Party members in key unions are renewing the fighting and socialist traditions of the Welsh labour and trade union movement.

Even though 2018 was relatively quiet for trade union struggle, members recalled the battles that they had led, participated in or supported - especially the University and College Union pensions strike.

Socialist Party members are also playing a prominent role in making the Cardiff May Day march a central date in the labour movement calendar.

Preparing for class battles also means preparing for extra party resources. Even though huge sacrifices had been made by members in collecting over £12,000 last year in Wales for the Socialist Party building fund, members dug deep to achieve a brilliant conference fighting fund collection of £1,130.