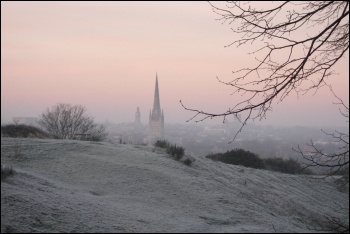 Mousehold Heath, where Kett's Rebellion was crushed, with Norwich Cathedral in the bakground, photo by Amitchell125/CC   (Click to enlarge)

An estimated force of 16,000 rebels set up a massive camp on Mousehold Heath to the north of Norwich. Under Kett's leadership, the rebels stormed Norwich and took the city.

The rebels, however, had faith that the government genuinely intended to deliver on its promise to end illegal enclosures. That is a bit like expecting the 1% to act in the interests of the 99%. Instead, the king's army under the Earl of Warwick was sent to massacre the rebels with the aid of 1,200 mercenaries.

The flip side of that coin was the unimaginable brutality with which aristocrats like Warwick treated the commoners. He only stopped because the gentlemen did not fancy putting their own hands to the plough - so repentant commoners were spared.