We say: tear down the Tory government! 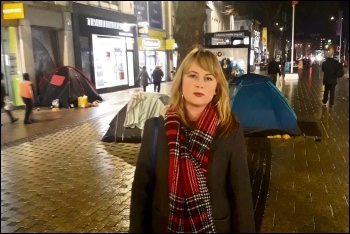 Cardiff Tory councillor Kathryn Kelloway has sparked outrage by calling on social media for the tents of homeless people in the city to be torn down.

Kelloway challenged Labour council Leader Huw Thomas on Twitter to "tear down these tents" for reasons of "safety", "prosperity" and for "a better image for Cardiff" - sparing not a word for the impact on the homeless people who rely on the tents for shelter.

Her tweet immediately provoked 2,000 angry replies, including from former Wales rugby international players Ian Gough and Gareth Thomas. Many pointed out it is the government led by her party that is driving the housing crisis and compromising our "safety" and "prosperity" with austerity.

Cardiff Tories were forced by the outcry to suspend Kelloway - but almost immediately reinstated her! She is unrepentant, calling critics "virtue signallers," claiming that adequate alternatives to rough sleeping exist - and that anyone on the streets has chosen to be there!

These comments by Kelloway are unfortunately echoes of claims made by Cardiff's Labour council. After Lindy Pring died in a tent in the snow last year, cabinet member for housing Lynda Thorne said "there is no need to sleep outside at night" because Cardiff Council provides adequate support for everyone at risk of homelessness. But it doesn't.

Like a lot of opposition-run councils, Cardiff wants to have it both ways. They deny the cuts they have obediently implemented are causing suffering in our communities, while at the same time denouncing Tory austerity in the abstract.

24 new rough sleepers appear on Cardiff's streets every month. Homelessness is up 12% on last year in Wales, according to Shelter Cymru, and up 9% in the last three months. And all experts acknowledge these figures under-report the actual levels of the problem.

Cardiff Council has cut a quarter of a billion pounds of services and 2,500 jobs. They have evicted from council housing the victims of the bedroom tax and other benefit cuts, at the same time as they cut funding for services provided by homeless organisations like the Wallich charity. They even abolished the community alcohol and drug team.

But most importantly, Cardiff Council refuses to take a stand against the government and fight for more funding, despite sitting on £100 million of reserve cash which could plug the gap while a campaign is built.

Big business demanded we put its need to restore profits before our need for housing, and big business politicians like the Tories and Blairites are only too willing to help them. It's not tents we should be tearing down: it's the Tory government and Blairite councils, and the capitalist system they represent.