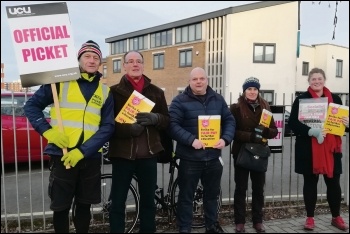 Spirits were high on the frosty 29 January morning that striking further education teaching staff gathered outside Leicester College Freemen's Park campus. The strike is over low pay as a result of what workers describe as "sustained underfunding".

16 further education colleges across the country were on strike. Many University and College Union (UCU) members in further education have seen the recent pay rises for nurses and teachers and say this has given them the push to call for action themselves.

The Socialist spoke to a lecturer on the picket line who has worked for the college for more than 20 years: "I am paid less now than I was 15 years ago. On top of that, staffing levels have halved over the past three to four years through redundancies while student intake has remained the same. The workload for the remaining staff has effectively doubled and we just can't cope."

At the Abbey campus the picket line had support from students, a UCU member from Leicester University and council workers tooting their horns on their vans.

The strike is due to resume again on 31 January with a further three days planned in March. With two colleges already gaining concessions before even taking any action the mood is hopeful that the reasonable demand for a 5% pay rise will be met.