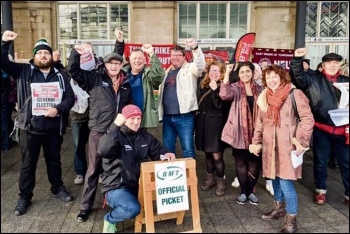 More than 150 trade unionists and activists rallied to Hull and District trade union council's call to defend the transport union RMT's picket line on 26 January. After the recent harassment of the Manchester and Leeds picket lines by far-right activists trying to attach themselves to the 'gilets jaunes' (yellow vests) movement, Hull trade union council took the potential threat seriously.

It was just as well because about half a dozen far-right members, identified from Manchester and Leeds, did turn up in Hull. The size of the trade union rally at Paragon station meant that they would have been stopped if they had tried anything.