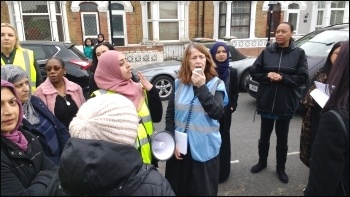 The recent indicative ballot of 82,500 teachers in England in the National Education Union (NEU) saw an overwhelming 85% vote for strike action.

This vote reflects the growing anger against the Tory onslaught on our schools and colleges. One third of secondary schools are now running deficit budgets. So short of cash are they that job cuts, increasing workloads and falling living standards have become the norm.

The strike vote comes on top of the recent 2,000 head teachers marching on Downing Street on a Friday in what was effectively an unofficial strike.

Local councils continue to come under massive pressure from parents and workers in local battles against cuts and academisation with victories in Newham and Lewes. Even some Tories are demanding more funding and the right to bring academies back in-house.

It is vital that the strike vote must now be used to step up the campaign to force what is a weak Tory government into retreat and out of office.

The NEU national executive will now meet on 28 February to decide what next. But there are already rumours that the leading officers of the union, along with some of the 'left' national executive members will be recommending doing nothing and will hide behind the anti-union laws.

The turnout in the indicative ballot was 31.4% and some are claiming that the union can't proceed to a formal ballot as it didn't show we could reach the 50% threshold that would be required in a statutory ballot.

To do nothing now and simply retreat into more lobbying would miss a golden opportunity to take on a government that's on its knees. A formal strike ballot would also give a boost to public sector union Unison members who have just started their own consultative ballot of over 150,000 school support workers.

Does it have to be a case of all or nothing in the NEU? No, we do not simply ignore the turnout and the obstacle of the Trade Union Act. However, it would be entirely feasible for the union to ballot the 3,000 plus schools and sixth-form colleges across England that got 40% or higher turnout in the consultative ballot. This would open up the potential for national action. The NEU members could then be joined later by Unison and the University and College Union who are currently balloting 74,000 university workers.

In the current explosive situation in education, this action alone could force the government to back track.