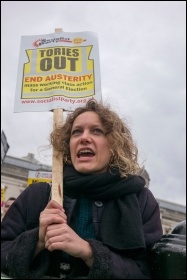 Marching against the government, 12.1.19, photo Paul Mattsson   (Click to enlarge)

While the Tory party crawls from one cliff edge of division and defeat to another, this enormous political crisis seems totally removed from our lives.

But all the time the sleeping lion of the trade union movement snores on, its leaders shamelessly squandering the key role organised workers could play in harnessing the anger and resentment at this ever more brutal them-and-us society.

If a lead was given by the unions and Corbyn, there could rapidly develop a mighty movement to push this rotten government over the precipice.

Because out here, jobs and terms and conditions are being slashed, life-and-death services destroyed, precarious working is at epidemic levels and foodbanks for working and non-working poor alike have become a normalised part of everyday existence.

Nine children in an average class of 30 are now living in poverty, with the Tories' catastrophe of Universal Credit plunging more families into crisis and desperation every week.

The Office for National Statistics trumpets wages being at their highest since 2011 - as if, after ten years of biting austerity and real-terms pay cuts, this is something to celebrate.

There are currently an estimated 78,000 homeless households in England in temporary accommodation and, if this continues, more than 100,000 households will be trapped by 2020.

May, who has said she won't lead the remains of her party into another election, is on borrowed time. This Brexit crisis must be the Tories' closing number. It's time to sweep this party of self-interested millionaire villains off the stage of history once and for all.