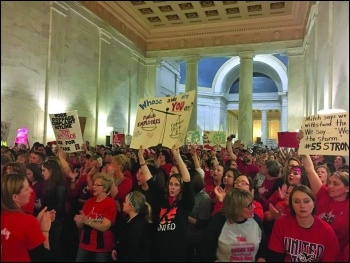 This was the latest strike in the nationwide teachers' revolt that began in West Virginia (pictured) last March and spread to a series of other states. The movement is encouraging workers in other industries to stand up, and can be the beginning of rebuilding a fighting labour movement in the United States.

The Los Angeles teachers' picket lines were solid and well-attended throughout the strike, and were joined by working-class parents and students who supported the strike overwhelmingly. The union held mass, exuberant rallies on an almost daily basis.

The new agreement received the support of 81% of union members. It secured several tangible gains for the teachers.

An increase in support staff - nurses, counsellors, and librarians - with various phase-ins of up to three years. Less standardised testing. A 6% raise. A reduction in class sizes. And the elimination of the hated "Section 1.5," which the district had previously used to declare an emergency and disregard all class size caps.

This is a victory for teachers and the broader working class. A UTLA loss would have been a victory for the discredited education "reformers" and their plan to privatise and dismantle public education, not only in Los Angeles but across the country.

The strike has now placed ending the corporate privatisation of schools firmly on the agenda of the Los Angeles working class.

A call to fully fund education, and for a state-wide moratorium on further 'charter' schools [privately run state schools, like Britain's 'academies'], must be taken up by the unions. They should build on the momentum of this historic strike and continue mobilising toward more decisive victories.

The agreement puts the school district and mayor's office on record to "jointly advocate for increased county and state funding" for education. However, we know that lobbying will not be enough to fund LA and California public education.

The first battle was won. But the well-funded forces behind the drive to destroy public education through privatisation and starving it of resources will not give up easily.

Winning will require escalating state-wide and national action. It should also be connected to the housing struggle and the fight for 'single-payer healthcare' [universal healthcare funded by taxes] in California.

To win fully funded public education and stop privatisation and charterisation, a California-wide movement is needed. Teachers' unions should organise for a state-wide, one-day teachers' strike, that could be called as part of a national day of action for funding public schools. The California Democratic Party has enjoyed a super-majority at the state and Los Angeles County levels for years. It is the Democrats themselves who have overseen and implemented the starvation and privatisation of public schools. It is not credible to expect them to suddenly reverse course and deliver proper funding for public schools Both in California and nationally, the leadership of the Democratic Party is beholden to the interests of the corporations and Wall Street, not to the interests of working people. To fight for quality public education, 'Medicare for All' (universal healthcare), and other working-class interests, working people need a party of our own that has no ties to the billionaires.

The LA teachers' strike shows that workers have enormous power in the economy and on the streets. We can collectively build massive pressure through strikes, mass demonstrations, and direct actions to win education funding.

With Oakland teachers about to strike, workers have another chance to bring coordinated pressure to bear upon not only Oakland Unified School District, but also the state government in Sacramento. Unions should make preparations for a one- day, state-wide teacher walkout, alongside a national day of action for public education.

Denver and Virginia teachers, both on the path to a strike, could join the action. A one-day strike such as this would shake the political establishment from Sacramento to Washington, DC.