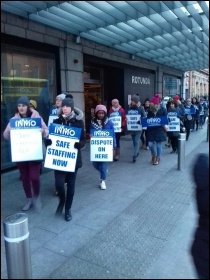 Nearly 40,000 nurses and other health workers in Ireland started a 24-hour strike on 30 January to demand a pay rise. Their union, the Irish Nurses and Midwives Organisation, has more strike days planned in February.

The average nurse has lost thousands of pounds from pay cuts during years of austerity and economic crisis. An INMO member, writing for the Socialist Party Ireland website, emphasised the "difficult and dangerous" working conditions.

Solidarity TD (MP) and Socialist Party member, Paul Murphy, described the "carnival atmosphere" on the picket lines and "the level of community support" because working-class people's experience of the health service is that it's completely underfunded.

Solidarity TDs, members of the Socialist Party, called on all workers to back the strike, and that they "will take the fight to the government in the Dail (Parliament)."

As well as demanding an end to austerity, privatisation and low and unequal pay, the Socialist Party supports a "fully funded national public health service free at the point of use" and nationalising private hospitals, pharmaceutical and healthcare companies.