Link to this page: https://www.socialistparty.org.uk/articles/28653 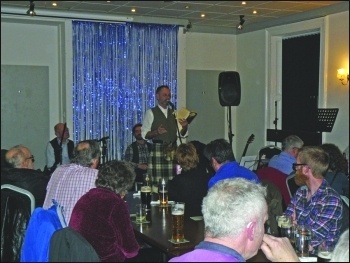 To get 30 people at a socialist cultural event in January in such a small town would be good, but over 60 people, including music lovers and much of the local left, came together for a really great night of songs, poems, music and politics lasting five hours!

Local band "Now and Again" played traditional Scottish and Irish jigs and reels, Nikki from Langholm went through decades of pop and John from Dumfries sang "The socialist ABC".

Members of the audience sang "Green grow the rushes-o", "Parcel of rogues in a nation" or recited "To a mouse" (which is not about Burns making a mouse homeless but about his fear of imminent eviction and destitution) and a poem penned by a survivor of the 1819 Peterloo massacre.

The Barton family performed a miracle of feeding everyone either haggis, neeps and tatties, or two veggie options, or this year also vegan.

It's safe to say that the speech about the life of Burns, the "Immortal Memory" address, was not the orthodox kind. It busted the myths spread after his death in a deliberate character assassination paid for by the Tory Home Secretary. 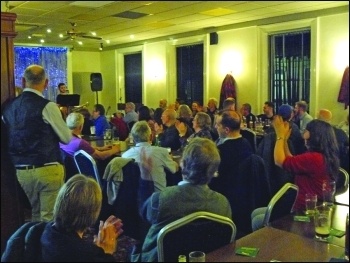 Burns was an active revolutionary democrat who opposed bigotry, racism and slavery, an enemy of the Hanoverian monarchy, a patriot to the people and an internationalist who supported the American and French revolutions. That's why the secret police drove him to his death.

Afterwards a "friend" burned a quarter of his writings and the literary establishment and state first vilified him and later sanitised and sentimentalised him.

For 200 years they suppressed his authorship of revolutionary poems published anonymously attacking the Tory Pitt dictatorship, which was fighting the French Revolution and the "swinish multitude" in France and in Britain.

After hearing this the whole audience sang his anthem of class struggle, ending in:

It's coming yet for a' that,

That man to man, the world o'er,

Shall brothers be for a' that."

As a low paid public-sector worker, Burns used his little money to buy four cannon for the French revolutionaries. We'll use the Fighting Fund money from this night to help fund the Socialist Party.