Link to this page: https://www.socialistparty.org.uk/articles/28654 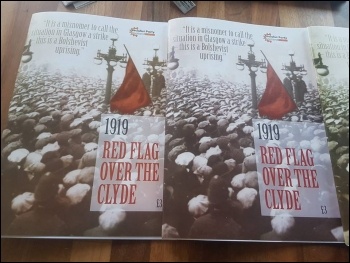 Organised by Socialist Party Scotland. A Glasgow Equal Pay striker will also speak at the meeting.

On Friday 31st January 1919, tens of thousands of workers gathered in Glasgow's George Square as their struggle for a 40 hour working week came to a climax.

In response to this massive display of strength and solidarity, and in anticipation of the workers' reaction to the final refusal of the bosses to accede to their demands, the authorities, acting on behalf of the bosses, mobilised thousands of police in an attempt to cower the workers and beat them into submission.

What followed was a full frontal confrontation between the organised working class and the state. The police charged the crowd with bayonets drawn and the workers, in response, uprooted the palings around the square and used them as weapons to defend themselves.

This event was to become known as "The Battle of George Square", and passed into working class folklore. Eventually the government authorised military force against the workers and that evening there were troops and tanks on the streets of Glasgow.

To commemorate the momentous events of Red Clydeside and to draw out some of the key lessons for today, Socialist Party Scotland has produced a new pamphlet: 1919 - Red Flag over the Clyde.

Authored by Jim Cameron, and reworked and extended from his pamphlet of the same name for Scottish Militant Labour in 1993, this is a contribution to the seismic events that shook Glasgow and the west of Scotland from 1914 to 1919.

A section of the pamphlet is dedicated to the ideas and struggles of the outstanding Scottish Marxist John Maclean, who played a decisive role in the Red Clydeside movement.

Protests, strikes and equality: Women in World War One