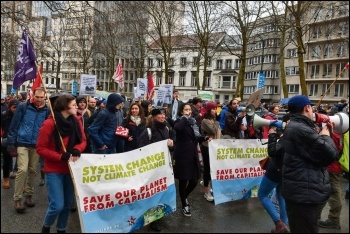 We face a climate catastrophe if urgent action is not taken. The problem is we cannot trust any current governments to put the interests of the planet, future generations or the billions of people already suffering from climate chaos - water shortages, toxic air pollution, food scarcity and climate-related poverty - first.

They act primarily to defend the interests of the bosses and the billionaires who are the source of the threat.

Since 1988, just 100 companies across the planet have been responsible for 71% of all emissions. Under capitalism, the highest goal is the pursuit of profit.

Globally, eight super-rich individuals own and control the same wealth as half the world's population. These obscene riches are the proceeds of merciless exploitation and ruthless environmental destruction.

A big part of our fight to save the planet is the fight to get the Tories - the defenders of the capitalist system - out and replacing them with an anti-austerity Corbyn government with socialist policies.

We welcome the call for a youth strike. We hope to participate in democratic discussion about what next. We believe mass collective action is what is required. And to achieve the change we need means building a powerful movement.

This requires linking up in action with the working-class majority - a potentially far more powerful force than the capitalist elite - around a socialist programme which puts people and the environment first.

We call for an immediate conversion to renewable energy, and guaranteed retraining and work for every job at risk, paid for by the energy companies.

The nationalisation of the energy companies alongside the banks and the rest of the major multinationals that dominate the economy under democratic workers' control and management is a vital step towards building a socialist future for the benefit of all.