Despite the EU, G20 and various governments pledging to phase out subsidies to fossil fuel companies, the total given to coal, oil and gas across the EU remains the same as in 2008.

Britain leads the way according to a report from the European commission, doling out £10.5 billion in support of fossil fuels - over £3 billion more than it spends on renewable energy.

France, the Netherlands, Sweden and Ireland all also gave more to fossil fuels. And even countries that didn't - like Germany - still subsidised fossil fuels to the tune of billions of Euros. 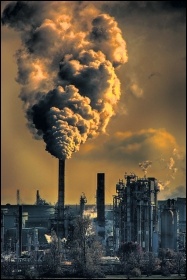 ...sea level rises for the billions

At the same time as fossil fuel companies rake in billions, climate change is already costing ordinary people around the world huge sums of money, as forest fires, landslides and other related disasters destroy homes and lives.

And the threat from rising sea levels is only getting worse.

The scale of ice loss has increased four-fold since 2003. A recent study has revealed that Greenland's ice is melting faster than previously thought, causing sea levels to rise.

Enormous glaciers are depositing ever bigger chunks of ice into the Atlantic. The ice Greenland lost between 2002 and 2016 was enough to raise the worldwide sea level by 0.03 inches annually. If all of Greenland's vast ice sheet, 3 kilometres thick in places, was to melt, global sea levels would rise by more than 20ft, drowning most coastal settlements.