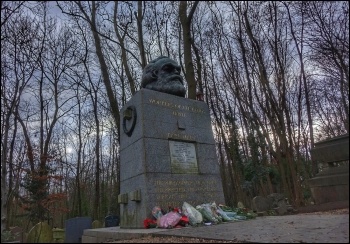 Vandals have attacked Karl Marx's grave in Highgate Cemetery, apparently with hammers. If Marx were still around, we think he'd see it as the Socialist Party does: a compliment.

It's evidence that the ideas of Marx and his collaborator Friedrich Engels - the ideas of scientific socialism - are once again a rising threat to the bosses and their politicians, a spectre haunting the bloody exploitation of capitalism.

The super-rich and their defenders have been hammering Marxist ideas for over a century and a half - to no avail. Because all they have to offer working-class and young people is austerity and misery.

Defacing a beautiful monument will not change that. Only the organised working class struggling to take economic and state power out of the hands of the billionaires and corporations will.

Whoever committed this destructive act, the real answer to poverty, division and despair is to build a new society based on public ownership and democratic socialist planning of resources. As the man himself wrote: "Workers of all lands unite. You have nothing to lose but your chains."