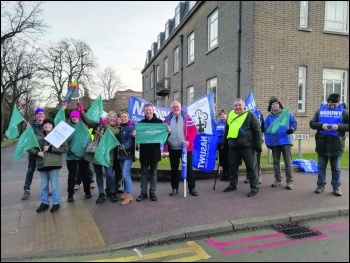 "Management has attempted to appeal directly to staff rather than negotiating with elected workplace representatives. This has backfired. It has made more National Education Union (NEU) members all the more determined to succeed."

This is what Leicester NEU officer Ian Leaver told Socialist Party members when more than 100 defiant workers from education unions NEU and NASUWT were on strike on a chilly morning on 6 February.

Wyggeston and Queen Elizabeth I College in Leicester lowered staff terms and conditions when it merged with Regent College. Redundancy payments have been reduced and payment-protection periods shortened.

The picket lines covered all entrances across the two campuses. Workers are prepared to continue the fight and go further if demands are not met. Additional strikes are planned for 13-14 February, with three more dates after half-term in March.