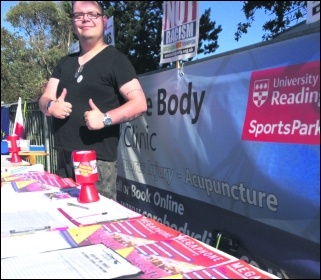 Sasha out campaigning with Reading Socialist Party   (Click to enlarge)

Well, I guess it all starts from when I was growing up in care in Glasgow.

I had always seen what wealthy people have, and what went through my mind was: why can't we have this for everyone? Why do some people have more than others, and why is their life so different from mine?

By my late teens I just saw the world as being unfair, and 'justice' being dished out by the rich ones who think they're better than the rest of us. I became a member of an anti-fascist group.

It was when I was in college for the second time, to study animal care, that a good friend of mine mentioned that what I was saying was the same as Karl Marx. I asked her, "who the bloody hell is he?"

She told me to read the Communist Manifesto, so I did. It turns out I had been thinking a lot of what Marx was saying all those years ago.

When I left Scotland, I saw myself as a Marxist, someone who keeps seeking truth in the world. I moved to Reading.

But I went to ground, and felt I was lost - until, at Reading Pride, I was given a flyer for the Socialist Party.

I looked into it. This was a way of expressing my ideas about everyone getting a fair hand in life. I was welcomed by the Reading branch with open arms, and was fascinated by my first meeting of the party.

Now I stand on campaign stalls with my new comrades, to fight the austerity of this blood-hungry government.

It was a new way to fight for me, someone who had been accustomed only to force, to letting fur fly. So thank you for taking the time to read this story from a Glasgow boy.

Reading Socialist Party: The way forward after the election

Reading Socialist Party: Tories out! For a Corbyn-led government with a socialist programme