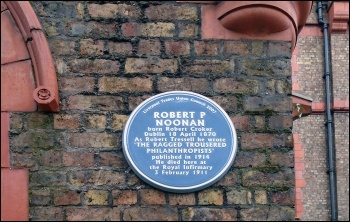 Around 200 people marched in Liverpool in memory of Robert Noonan - better known by his pen name Tressell - on the anniversary of his death, Sunday 3 February.

The event in remembrance of the celebrated author of 'The Ragged-Trousered Philanthropists' was organised by the Robert Tressell Memorial group and Walton Constituency Labour Party.

The march began at Noonan Close and went passed Walton Jail, up to the main entrance of the Rice Lane City Farm where Tressell is buried.

Born in Dublin 1870, he moved to London where he wrote one of the most famous working-class novels in history, known around the world.

It depicts the conditions of painters, decorators and workmen in Edwardian England, and the discussions they had on the job regarding the class exploitation we still clearly face.

Noonan died in Liverpool on 3 February 1911 at the age of 41. He died broke, and was buried in a pauper's grave along with 12 others.

The cemetery is now also a farm and has visitors from far afield, making the pilgrimage to see the grave of the famous workers' author Robert Tressell.

Corbynista MP Dan Carden said a few words, followed by local activists with a rendition of the world socialist anthem, the Internationale.