Link to this page: https://www.socialistparty.org.uk/articles/28699 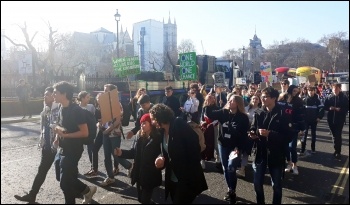 Marching for the environment in London, 15.2.19, photo by Scott Jones   (Click to enlarge)

Youth strike for the climate: "There's no planet B" 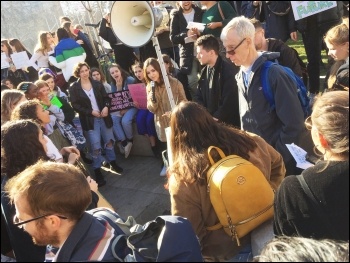 Thousands and thousands of teenagers took over central London On Friday 15th February in a brilliant display of anger and determination.

"What do we want? Change!", they chanted. Many carrying homemade placards, they stopped traffic, mounted buses, and used traffic cones as megaphones.

The police on horseback were surrounded by teenagers stroking the horses and saying "Aah"! 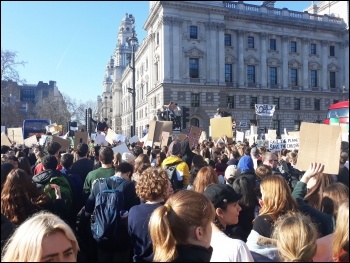 Running back and forth, cheering, chanting, the sun was shining and young people were demanding a future on this planet.

All our socialist material was snapped up in minutes. Our 'red' sound system enabled the young participants to make speeches and led some of the chanting; while at the same time young people were just marching and chanting everywhere - on strike!

We say: join the socialists, we need socialist change.

Over 300 young people, including school students from Glasgow and as far as Bearsden who had walked out of classes, demonstrated at the Glasgow #youthstrike4climate as part of the UK wide day of protests and school strikes.

School students from Boclair Academy in Bearsden told us: "We walked out of class and no teachers tried to stop us; in fact they gave full support as we are fighting for our future".

Young people carried homemade placards saying "there's no planet B", "youth strike 4 climate", "we don't want to be dinosaurs" , "time is running out" , "denial is not a policy".

Glasgow Gaelic School mobilised a group of politicised youth who would put all capitalist politicians and their short-term 'solutions' to climate change to shame. Alan told us: "We have come here because of the Swedish school student Greta Thornberg speaking out, the Greenhouse effect is burning up the planet and the politicians seem to only have short term solutions that benefit the rich". 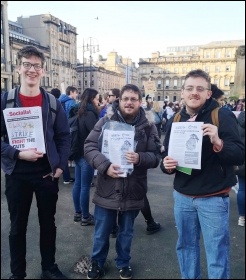 Young people chanted "hey, ho fossil fuels have got to go" and "no more coal, no more oil, leave the carbon in the soil".

Students also came from the Glasgow universities and there were banners from the Unite trade union.

Socialist Students and Socialist Party Scotland gave out leaflets explaining that socialist change is needed to stop climate change and the need for this energetic growing youth movement to link up with workers and the trade unions to demand public ownership of the top companies that dominate the economy, and massive investment into renewable energy. 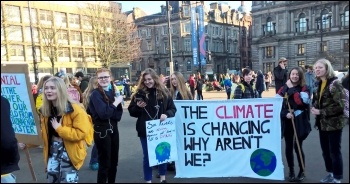 More than 1,000 people marched in Brighton, joined by hundreds of school students who walked out of their lessons against climate change. The lively demonstration and chants of "Tories out" showed the mood that exists to change how our society is run.

Now young people must join with workers organised in the trade unions to build a mass movement that can end the climate crisis. The whole economy rests on the labour of working class people and as such, the unions are the most powerful force for ordinary people to win our demands.

With big business producing the vast majority of CO2 emissions and chasing environmentally unsustainable growth, the climate crisis is a crisis of capitalism itself. Socialist Students calls for public ownership of these major industries, under democratic workers' control and management. Only on that basis can we plan the economy for the needs of people and the planet rather than for private profit.

Around 1,000 students joined the walkout and rally in Leeds. Socialist Students very rapidly ran out of 'socialist change not climate change' placards and leaflets.

Lots of students said they were socialists, reflected in the 26 copies of the Socialist sold.

Seventy school students marched on the streets of York. They were there to protest against climate change and the mass extinctions that face our planet. They weren't there to listen to speeches from the 'great and the good' - who were not present anyway, but to rage against the threat to all of their futures.

Many of them were also there to discuss ideas. I took copies of the Socialist and leaflets - I was there to promote socialist ideas. A small percentage of the students said that they weren't interested in politics but were there to protest and to save the planet. Most of the students took a different view and were keen to enter into a discussion around how we might be able to prevent climate change.

In the general discussions that emerged some took a social democratic position, saying that the Greens and Labour are better on the environment than the Tories. Most students I spoke to, though, thought that socialism, with workers' democracy, was a better way and the only possible solution.

Around 100 students from a number of different schools and colleges gathered in Plymouth city centre on Friday. As the morning went on, more students arrived. They were singing "We've got the whole world in our hands" and chants of "There's no planet B" started to break out. At 1pm they decided to march through the city centre to the office of the local MP.

Ikes was keen to share why she was involved:

"We need to encourage youth and future generations to fix these issues, governments and corporations are not doing enough. We need to become carbon neutral and we need to stop using so much plastic. Companies need to be clamped down upon for using excessive plastics and more needs to be done to encourage alternatives."

Eloise, who organised the Plymouth strike had this to say:

"I organised this on Facebook less than 24 hours ago because the closest strike that was taking place was in Exeter and I felt that Plymouth should get involved too. We want to create an environment that will last for generations to come; we care and we need change. It'll be too late by the time we're adults! I'm so pleased with the turnout we've had today. It was a lot more than I was expecting and people of all ages have joined in or stopped to show their support. This is a great start and already there is talk of organising another strike for March 15th".

This version of this article was first posted on the Socialist Party website on 15 February 2019 and may vary slightly from the version subsequently printed in The Socialist.