Link to this page: https://www.socialistparty.org.uk/articles/28700 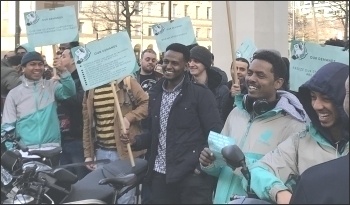 Fast food giant Deliveroo can usually expect to have a surge in orders on Valentine's Day. Things were slightly different this year, as around 40 riders in Manchester took militant strike action, demanding an end to poverty pay and insecure conditions.

Their central demands were: £5 per delivery, £10 an hour for waiting times and pay boosts for freezing weather.

It is well known that Deliveroo riders face some of the harshest and most exploitative working conditions in the country.

The company has a long history of describing its workers as 'self-employed'. This gives senior management an excuse to cut back on services and vital protections for staff.

This was pointed out by the strikers, who drew attention to the lack of support they receive after accidents and injuries they face on the job.

All of this created an energetic and determined mood on the pickets. The strike started early at the company's offices.

Riders were appalled to see the gates had been locked and security had been sent out to try and move us all on.

This didn't break our spirit. We simply marched, horns blaring, to their other office in the city centre!

The mood from the public was overwhelmingly supportive. Cars and vans would regularly pull up to show solidarity and take leaflets to show to workmates.

This is not surprising. The last decade has been one of vicious assaults from capitalist bosses and their governments, and workers are more desperate than ever to see mass action to follow as an example.

What we need now is for the trade unions to properly mobilise. The TUC must act immediately to call action to end the gig economy. We cannot sit through any more years of this!

This version of this article was first posted on the Socialist Party website on 16 February 2019 and may vary slightly from the version subsequently printed in The Socialist.