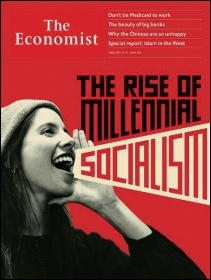 "Socialism is storming back" declares the Economist magazine. It points out that 51% of 'millennials' in the US aged 18-29 have a positive view of socialism.

In the same breath, the Economist claims that inequality is not continuing to rise. That's news to the millions at the wrong end of rising inequality! Its conclusion is that it would be "politically dangerous" to claim that socialism is "the answer to capitalism's problems".

Instead its answer is to call on liberals to oppose socialism - without saying in what ways they can "answer capitalism's problems". Because they can't. Because they have no answers. Capitalism must go and socialism is the answer. 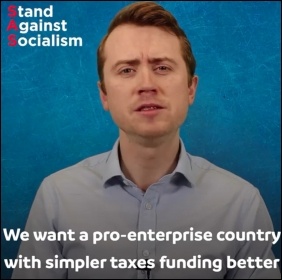 Also scared about the rise of socialist ideas is the right-wing Taxpayers' Alliance, widely believed to be a Tory front organisation. They have launched a "Stand Against Socialism" campaign to make the case for a "pro-enterprise economy".

Will it include previous proposals put forward by the Alliance? Tory MP and Alliance organiser Phillip Davies' idea is that disabled workers should receive less than the minimum wage. Their research director called on the Conservatives to cut older people's benefits sooner rather than later. Because many of them would "not be around", or would have forgotten who was responsible, by next election.

Let's keep the Taxpayers' Alliance frightened by fighting for a socialist economy, under democratic workers' control, that meets the needs of all and not the profits of the rich.