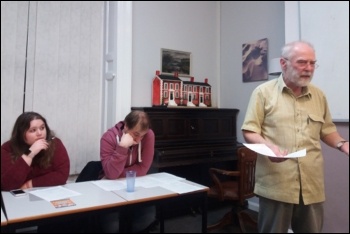 If adopted, this budget would use reserves and borrowing to reverse all the Labour-run local authority's cuts to jobs and services, as well as reversing this year's fee and rent increases.

In contrast, this is the ninth cuts budget in a row proposed by Leeds Labour. For the last year, Leeds City Council has received no 'revenue support grant', part of £266 million cuts from central government.

But the council has not led any serious fight for the return of this stolen funding. It has instead passed on Tory cuts. Meanwhile it has sought partial replacement though local business tax growth from city centre development, trialling 100% business rate retention.

Even the council's own proposals admit that any "apparent growth in the economy has not translated into business rate growth; in fact the income from business rates available to the council declined from 2014-15 to 2016-17, only returning to 2014-15 levels in 2018-19."

With a £90.8 million projected budget gap up to 2021-22, the council will consider "stopping, delivering differently or charging for those services that are no longer affordable."

Leeds City Council is already spending reserves to support its budget, such as 'un-earmarking' the 'Early Leavers' Initiative' reserve, and making temporary use of the 'Section 106' money developers must pay. But this year it is actually putting an extra £4.5 million into reserves, following a large portion of a £7.3 million VAT rebate last year!

Leeds TUC identified £6.63 million of cuts to jobs and services, and increases to rents and fees, in this year's budget. This is out of a larger budget gap partially plugged by reserves, as well as cost-saving capital investments like upgrading to LED street lamps.

Important among the council's attacks is an inflation-busting 4.3% rent hike for tenants of council homes built on profit-sucking 'private finance initiative' schemes - while other council tenants receive 1% rent cuts. The council is also pushing for 'efficiencies' in various departments, including leisure and libraries.

The alternative budget incorporates demands from the Leeds Labour Representation Committee, a Labour left group, like ending the use of bailiffs to chase council tax arrears. And it calls for the council to pay outsourced workers the same as in-house workers, as demanded by the Leeds branch of public service union Unison.

But the key to the alternative budget is not simply passing on no cuts this year, but mobilising trade unions and community campaigns to demand the return of all funding stolen from our city. We also demand that Shadow Chancellor John McDonnell pledge an incoming Labour government will reimburse councils who use reserves and borrowing to set no-cuts budgets.