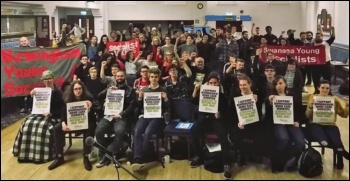 Around 90 delegates and visitors from Socialist Students groups across Britain debated the student movement and its socialist potential on Saturday 9 February.

Socialist Students national organiser Theo Sharieff introduced the new national programme for Socialist Students, approved by the conference. He spoke about the potential role of the student movement in helping to kick out the decaying Tory government.

We welcomed Sam Morecroft from the Sheffield branch of the University and College Union (UCU). He highlighted the importance of Socialist Students' solidarity work during last year's pensions strike.

And a commission on the very important upcoming strike for women's rights in the Spanish state. This was introduced by Marina Mata, visiting from the Sindicato de Estudiantes (Students' Union) and the Libres y Combativas (Free and Combative) socialist-feminist campaign.

A robust and political motions debate dealt with various pressing issues. We discussed our response to the capitalists' political crisis and growth of the far right. We resolved to support youth strikes for climate action, with our message that workers' struggle for socialist change is the only way of ending capitalist environmental destruction.

The UCU is again balloting for strike action on campus, this year over pay and conditions. Socialist Students continues to be an organisation with an enormous potential to bring about real change on campus and more widely.

In a year where the National Union of Students, controlled by the right, finds itself in an unprecedented financial crisis, the importance of building a fighting student leadership has never been more important.