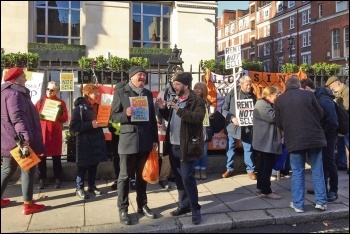 The venue was a swanky central London hotel, and housing association homes were up for grabs. We wanted to protest that they should stay as social housing stock.

Campaigners went into the auction. Socialist Party member Nancy Taaffe spoke when the first housing association property came up, to call on buyers not to bid, and Savills not to handle these badly needed homes.

Tens of thousands of socially rented homes are lost due to housing associations selling them in this way.