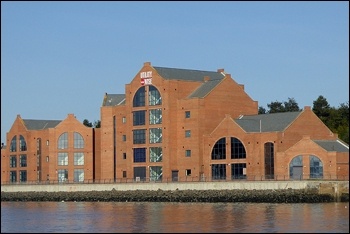 Already reeling from numerous national and local collapses of businesses today fresh blows were rained down on Tyneside's struggling workforce. Utilitywise PLC is a firm which sells energy on a second-hand basis following speculation of prices. Initially based in South Shields the company relocated across the Tyne to North Shields in an ironic cost-cutting exercise, taking up new quarters at Cobalt Business Park which caused significant disruption for many staff.

Following months of communication with Utilitywise staff it became clear to Socialist Party members in North Tyneside that the firm was transitioning from danger to imminent demise. This deterioration arrived as no surprise based on what employees shared with us. High-pressure selling, reckless management, a an 'in' clique and hard-partying culture encouraged by bosses, and totally inappropriate managerial gambles on the corporate roulette wheel made Utilitywise a ticking timebomb.

While CEO Brendan Flattery was in hiding somewhere at the facility, it was director Chris Blench who was left with the unenviable task of informing the 1,000 strong workforce of the terrible news that not only were they being made redundant, but that they would receive no commission or wage payments for February. Incredibly though Blench insisted workers should continue to work as normal, implying they could turn the situation around! One worker fell to the floor and suffered a seizure. Chaotic scenes were described of angry workers confronting Flattery, and one expecting mother told me the situation was risking her already-hazardous pregnancy.

The estimated £31 million of debt accrued by Utilitywise was pushed over the edge with the recent announcement that a deal had gone sour, adding another £7.6 million loss resulting underestimating consumption in its contracts, which the firm attributed to ''exceptional costs''. Trading was suspended after banks refused to lend an additional £10 million to keep the company solvent, and we're told FTI Consultants administrators were snuck in to the facility after business hours.

Tyneside's proud tradition of trade union struggle has resulted in many victories across the area, with Socialist Party activists standing in solidarity with workers engaged in struggle. What's remarkable about Utilitywise is that such a large company had such low trade union membership density. There are lessons to be drawn from this, and opportunities for the Communication Workers' Union and other unions committed to growing in the increasingly diverse telecommunication sector it traditionally serves. The Socialist Party says that energy and all its constituent sectoral components belong in public hands, owned and operated by and for workers and service users. Only the rational planning of resources is capable of preventing the type of catastrophic situation unfolding across the North East in the wake of Utilitywise's wholly preventable demise.