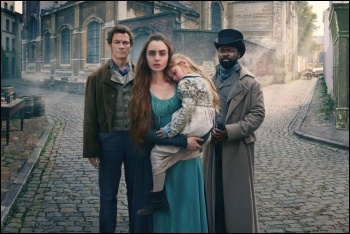 Les Misérables started life as a three-volume novel by Victor Hugo written during his political exile from France. In the preface, he wrote: "So long as the three problems of the age - the degradation of man by poverty, the ruin of women by starvation, and the dwarfing of childhood by physical and spiritual night - are not solved; ... so long as ignorance and misery remain on earth, books like this cannot be useless."

Victor Hugo was identified in the public mind with the main character, Jean Valjean. When a reactionary mob attacked Hugo's house in Brussels at the time of the Paris Commune (1871) - he had denounced the Belgian government's refusal to grant political asylum to the revolutionary Communards - they shouted "Down with Jean Valjean"!

To adapt a three-volume novel into a TV series is no mean feat and it does make the story available to a whole new audience.

The character played by Dominic West - prisoner 24601, Jean Valjean - dominates the narrative of the BBC production of Les Misérables. There are no spoilers in this review but his fate represents the incredible injustice of the regime in France and the appalling treatment of the poor in the wake of the defeat of Napoleon at the Battle of Waterloo.

Fantine and her impossible task of keeping her daughter and her job is brilliantly portrayed by Lily Collins. The poor in general had a rough deal in that period; the working-class women suffered it twofold. It is the death of Fantine which spurs Jean Valjean into action and begins a chain of events which disrupt the comfortable life he has made for himself.

The vicious behaviour of Javert, the policeman, played by David Oyelowo is a personalisation of the cruelty of the law. Jean Valjean's 19 years in prison for stealing a loaf of bread is justified for Javert because "it's the law".

Those familiar with the musical version will remember the comic roles of Thérnardier and his wife. The dark side of the characters is much more to the fore in this adaptation. However, the scene in episode three where Madame Thérnadier (Olivia Colman) is making a game out of beating Cosette, to the great amusement of the clientele of their inn, is brilliantly choreographed. It is a situation in which the laughter of the audience is crueller than the actions of the actor.

For all the darkness, the novel and this adaptation both offer a message of hope. Jean Valjean's personal struggle for redemption could be a metaphor for the redemption of French society - which the revolutionaries of the day, like the 'gilets jaunes' (yellow vests) of today, seek to bring about. Socialists should be inspired by this story.