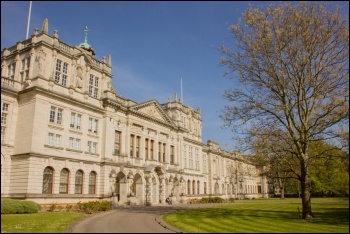 The University and College Union (UCU) is combining its national ballot over workload, casualisation and pay with a simultaneous ballot over the threat of local compulsory redundancies to hit the Tories 50% turnout threshold.

The university has a budget deficit of more than £20 million. But cuts aren't aimed the Vice Chancellor's £256,000 salary, or his five-figure 'performance bonus'.

The university favours new buildings over staff. It's undergoing a £600 million campus development, and in 2016 borrowed £300 million - the largest public bond in UK higher education history - at £9 million interest a year.

This time last year, the union was preparing to strike over pensions - a strike which led to serious employer concessions. At Cardiff University, Socialist Students and the trade union council spoke at picket lines and rallies.

These impressive strikes showed the potential power of organised collective action, and this year, the workers are better prepared for what's ahead.

Staff will not tolerate further assaults on their working conditions, and we must also use the union elections to elect a fighting left leadership to coordinate our fightback.

Cardiff East Socialist Party: How the slave trade was ended