Link to this page: https://www.socialistparty.org.uk/articles/28740 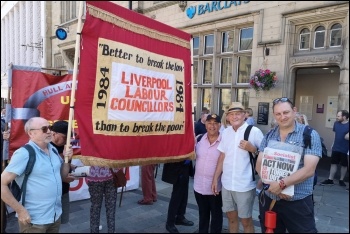 Some of the Liverpool 47 socialist Labour councillors at the Durham Miners Gala, 14.7.18, photo Dave Nellist   (Click to enlarge)

Over the last 30 years, hundreds and thousands of attacks have been made on Liverpool's socialist-led city council and on the record of Militant, predecessor of the Socialist Party, in the 1980s.

Many pens dipped in much poison have been pressed into service to undermine the record of struggle in the city.

In her comment responding to former council deputy leader Derek Hatton's re-admittance to Labour, Hannah Jane Parkinson writes not in the usual manner of the Guardian but viperously attacks the left in a fashion more associated with the Daily Mail. More importantly the article is factually wrong from start to finish.

Hannah argues that the Militant era in Liverpool was a disaster from start to finish. But this was not how things were seen by the working class of the city.

The council had mass support. It was never defeated in an election. The Liverpool 47's leadership of the council attracted higher votes than in any election since the second world war.

In other words, when the policies corresponded to the needs and aspirations of the working class, then support was forthcoming.

Instead the socialist leadership of the council was removed undemocratically by a combination of Neil Kinnock, now a lord and then Labour leader, the right wing in the Labour Party, the press and the Law Lords.

Kinnock started it with his move to expel socialists and the Law Lords finished the job with the penalty fine.

Why has this come up now? Because we had such influence in the trade unions and in the Labour Party. Today those joining the Labour Party would give their eye teeth to have the situation that existed then - monthly meetings of 500 people with democratic discussion and debate.

All decisions of the council were made democratically with opposition allowed to put their point of view.

Hannah's article is a travesty of the truth. Even Lord Reg Underhill, who made the first attempt to expel Militant supporters from the Labour Party, was effusive on the housing record of Liverpool City Council.

For those who have suffered, suffer or are at risk of homelessness from today's housing crisis, this approach, instead of that taken by Blairite-led Labour councils, should be celebrated and fought for.

There was mass support for the Labour Party in the city - for Tony Mulhearn as its chair, for Derek Hatton as deputy council leader.

Tom Sawyer, at the National Executive Committee of the Labour Party in February 1986, said: "I defy anyone to tell me how you can go to Liverpool and defeat Militant by argument".

Because this was not just a case of what the working class received but workers and young people taking a democratic part in the decision process.

Derek Hatton played an important and heroic role. He made sacrifices in the battle. But he moved away from us.

We don't take responsibility for his subsequent actions. But this attack is about trying to discredit the role we and he played in Liverpool council, which has been recognised by the working class in Merseyside and internationally.

But these facts are not of interest to those who wish to denigrate the important lessons of Liverpool.

Hannah writes: "Hatton's nadir came when he hired taxis to deliver redundancy notices to the council's 31,000 staff, on the basis that the council couldn't afford to pay them, as a 'tactic' to extend negotiations of the Whitehall stalemate".

The Labour group decided on the tactic of issuing 90-day redundancy notices to the 30,000 strong workforce.

Yes, this was a tactic - to buy time to balance the books and to put pressure on the Labour leadership to support the council's no-cuts budget strategy. But it was a mistake.

We warned Derek that Kinnock would use it. And moreover it is vital that if you make a mistake you always admit it, in order to correct it.

Derek had to make a decision on the spot - and the workers understood when it was explained. But it is always necessary to visualise how your enemies will exploit things.

In this case Kinnock and Charles Clarke, subsequently a right-wing MP in Blair's pro-war cabinet, were waiting to pounce.

Nonetheless not a single worker was made redundant by Liverpool City Council. Can Labour councils today make the same claim?

What the Liverpool 47 achieved was historic. They defeated Tory prime minister Margaret Thatcher. They won £60 million for Liverpool.

And it was not achieved through strong arm tactics, through bully boy methods, but on the basis of open democratic discussion and debate.

Thatcher was fighting on two fronts - Liverpool and the miners' strike. Once she had defeated the miners she turned on Liverpool.

With this the counter-revolution in the Labour Party began in earnest - it started under Kinnock, followed by John Smith, Tony Blair and Gordon Brown.

And it ends in the 'grotesque chaos', to quote Kinnock, of trying to hold the mighty British labour movement to ransom, always aided and abetted like today by the right-wing press.

But they will not succeed in this - shown by their measures today where the Blairites MPs are hooking up with Tory renegades to cobble together a new centrist-type party.

The scandalous attacks on the Militant have zero basis in reality. But truth is not of interest to those who wish to attack socialists.

Hannah claims we had an "opposition to policies that focused on particular oppressed groups". It was Militant supporters who launched the Campaign Against Domestic Violence (CADV) in 1991.

CADV put domestic violence into the public domain. We raised it in our trade unions, organised conferences on it, wrote to newspapers, organised a national demonstration and then simultaneous protests outside prisons around the country to raise awareness on the need for legal change.

CADV aided trade unionists and campaigners in negotiating policies in relation to domestic violence that would look sympathetically on sick leave and requests for transfer, for example.

Many employers and councils adopted these policies. That was an historic victory for women.

Hannah also raises the appointment of Sam Bond as the council's race relations officer. The issues raised by the Sam Bond affair were rooted in the long history of the black communities of Liverpool.

More than any other city in Britain, Liverpool was built on the slave trade. The Black Caucus was self-appointed as the leadership of the black population with no democratic legitimacy in Liverpool 8.

We consulted the community and made clear proposals on the issue of full-time employment of a layer of long-term unemployed, particularly black young people - as a result of the racist discrimination they faced - in deprived areas of Liverpool.

Hannah's attacks have been echoed by John Mann. His lies have been answered by us many times. For instance in May 2016 when he joined in the right-wing attacks of anti-Semitism on the left, Socialist Party executive member Clive Heemskerk wrote in a letter, that the Guardian refused to print, that Mann "was a leading figure in an anti-Militant organisation known as Clause Four and, for two years, the chair of NOLS [National Organisation of Labour Students] (1983-84).

"Within the NOLS, Militant was falsely attacked by the Clause Four group for 'not supporting the Palestinians' because we stood for the right of two states - Israel and Palestine - to exist side by side, which we argued would be possible on a socialist basis.

"The Clause Four-led NOLS, on the other hand, argued that the national rights of Israelis must be subsumed into a single, capitalist state - a 'secular, democratic state in the whole of Palestine'."

In other words Mann has done a 180 degree turn because it suits his political needs.

The re-admittance of Derek Hatton, Liverpool deputy council leader 1983-86, to the Labour Party poses the re-occurring question under Jeremy Corbyn's leadership of opening the party up to socialist fighters and the need to transform it into a 100% anti-austerity party.

Now that three Tories have joined the Independent Group with the eight anti-Corbyn Labour MPs the picture is clear.

This is an attempt to undermine Jeremy Corbyn's leadership and to derail the Corbyn revolution which promised an end to austerity and a programme to create jobs and housing and offer a future to young people - including a world safe from environmental catastrophe denied them under capitalism.

We hope that now Labour's doors will be thrown open - to the workplaces, the estates, the school students protesting for the planet and all others who have been expelled from Labour for no other reason than standing up for the working class.

In November 2016, 75 expelled and excluded socialists, with over a thousand years of Labour Party membership between them, applied for re-admittance to the party.

This approach was backed by hundreds of signatures of trade unionists and community organisations. The application was rejected by the (then) general secretary Iain McNicol.

Here is the link to correspondence between the Socialist Party and Jenny Formby, Labour Party general secretary, on our request to affiliate to Labour from September 2018.

We wrote: "We think this [open discussion about Socialist Party affiliation] is particularly urgent given the dramatic stepping up of the war against Jeremy Corbyn's leadership by the pro-capitalist Blairite wing of the Labour Party, backed to the hilt by the capitalist establishment and media.

"We see a very urgent need to organise and mobilise all those who support Jeremy Corbyn's anti-austerity policies into a mass campaign to democratise the Labour Party, allowing the hundreds of thousands who have been inspired by Jeremy's leadership to hold to account, and to deselect, the Blairite saboteurs.

"These saboteurs have made clear that their priority is not the election of a Labour government but the removal of Jeremy Corbyn at any cost.

"We believe the Socialist Party can play a useful role in the campaign to transform Labour, and would therefore like to discuss affiliation."

The record of the Socialist Party's predecessor Militant in Liverpool is clear. The Militant-led Liverpool City Council built council houses.

It expanded council services. It had apprenticeships for council jobs. This stands in stark contrast to the record of Blairite-led Labour councils today who pass on Tory austerity leading to homelessness, job cuts and increasing child poverty.

This is why Labour needs to be transformed - so that it can fight these attacks on working class people - not implement the current 'grotesque chaos'.

This version of this article was first posted on the Socialist Party website on 20 February 2019 and may vary slightly from the version subsequently printed in The Socialist.