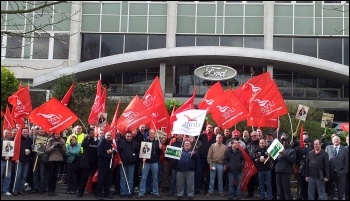 A national mobilisation is needed of all car workers who face closures and redundancies, photo P Mason   (Click to enlarge)

On 19 February, Honda announced it would be stopping production of the Honda Civic along with plans for the complete closure of the Swindon plant by 2021, with the loss of 3,500 jobs.

Workers expressed horror and shock at the announcement. These plans will have a devastating effect on the local economy - not just in the plant itself but also in the scores of local firms that supply and service it from the surrounding area. Up to 12,000 jobs could be affected in a town of 180,000.

This announcement was not even made directly to the workforce but instead delivered via the media. This shows Honda's contempt for its own employees. One group of workers even learned the news from their sick colleague - who saw it on TV and phoned his workmates to see if they had heard anything.

One worker compared the likely effect of the plan to the devastating impact of the railworks closure in the 1980s. Another pondered what would replace well-paid jobs in a local economy of warehouses rather than manufacturing.

The company also confirmed that it will close a plant in Turkey, moving all of its European production to a factory in Japan. They put this move down to changes in the global economy, the recent signing of a trade deal between the EU and Japan, and the continued uncertainty surrounding Brexit.

Much of the anger of workers was focused on pro-capitalist politicians who seem unable to resolve the climate of confusion and inertia which emanates from Westminster.

The Honda shop stewards have a proud record of defending their members. They have worked hard to build up union organisation at the plant and have been big supporters of the National Shop Stewards Network.

In 2011, Unite convenor Paddy Brennan won his reinstatement after being suspended by management. Plans are being put in place for a demonstration in Swindon to defend the plant.

The response of the labour movement in Swindon must be firm. Yes, negotiations should take place to try and secure the plant. But a determined campaign to mobilise the workforce and community is vital. This should start with a demonstration through the town - led by the shop stewards and calling for the nationalisation of the plant by an incoming Jeremy Corbyn government.

Indeed, Corbyn must give his complete and immediate support to the workforce in their fight to defend these jobs - placing as much pressure as possible on the government.

Any town-wide demonstration could be as big as the one that took place to defend the Longbridge plant in Birmingham when it was threatened with closure.

Unite the Union needs to put its national resources behind this fight, linking with the local shop stewards and mobilising the entire community and labour movement to defend these jobs and to keep car manufacturing in Swindon.

This could act as a national mobilisation for all workers who face closures or large-scale redundancies, such as at Ford Bridgend and Airbus in north Wales.