Tory education 'reforms': "a tiny drop in a stormy ocean" 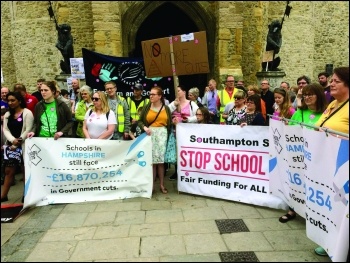 Billions of pounds have been cut from schools funding by the Tory government, photo Nick Chaffey   (Click to enlarge)

As the Brexit crisis continues to engulf the government in Westminster, we continue to pay for a very real crisis that has unfolded since the 2007-08 crash.

The state of our schools and the impact on young people, especially their mental wellbeing, is a national disgrace. The teacher recruitment and retention crisis inspired an unprecedented march of a thousand head teachers in the autumn.

Education Secretary Damian Hinds has been forced to respond by introducing measures to try to attract more graduates and to keep staff. While any positive reforms should be welcomed, these changes are a tiny drop in a stormy ocean.

The Department for Education proposed slightly increasing bursary payments for new teachers, while shifting some payments to the third and fifth year of teaching, to keep staff.

However, when 40,000 teachers leave the profession over a 12-month period, many down to unsustainable workload and unbearable monitoring regimes, structural reforms are needed.

Teacher contracts still allow for open-ended workloads and many newly qualified teachers are burnt out within a few years and will never see much of their 'golden handshakes'.

Hinds proposes £130 million for training, but when there have been £2.3 billion real-terms cuts, this is papering over gaping wounds in the support that's needed.

If the Tories were serious about saving education, they'd listen to the trade unions that have clearly identified what is needed.

They must reverse all cuts to education to reduce class sizes and boost the numbers employed in our schools. And they should introduce a new teachers' contract which caps teacher working hours and guarantees at least 20% planning and preparation time so we can do our job well within reasonable hours.

There should also be a boost to education workers' pay which has been cut by over £4,000 on average since 2010.

We know that none of this will be gifted to us, and the parlous state of education has come about partly because of a lack of a lead given by the education unions to fight these attacks.

The recent indicative ballot conducted by the National Education Union (NEU) on school funding should prepare the ground for a serious confrontation with the government. With public sector union Unison also balloting school staff there is the potential for coordinated industrial action.

The NEU should draw up a battle plan of strikes and a national demonstration on education funding. The education unions also need to be prepared to back up their recent 5% pay claim with action.

There is enough money in society to pay for a decent education for all, but that money is concentrated in the hands of big business and 'PFI' privatisation firms, who bleed our schools dry.

We must link this fight to the need to change society and build a socialist education system based on the needs of our communities and not the interests of the fat cats and their mouthpieces in Westminster.