Non-fiction: 'Unhealthy Profits: PFI in the NHS - its real costs and consequences' 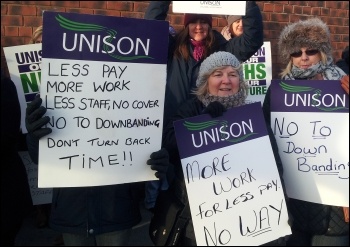 Over the last 25 years and more, what is now Mid Yorkshire Unison branch, led by Socialist Party members, has been at the forefront of the fight against attacks on the NHS and its workforce.

This book is a product of that fight, written to chronicle their struggle, show what a fighting trade union leadership in the NHS can achieve, as well as provide a wealth of evidence around the disaster that is the Private Finance Initiative (PFI).

While PFI was first dreamt up by the Tories, it was implemented with gusto by Tony Blair's New Labour government. By using financing from the private sector, rather than cheaper public sector borrowing, these costs appeared off the state finances.

While the spiralling costs of PFI contracts have provided bumper profits for the companies involved it has drained NHS finances, leading to cuts, mergers, downgrading of services and attacks on the pay, terms and conditions of NHS staff.

The book is at its liveliest when discussing the battle against the PFI-financing of a new hospital, first at Pinderfields in Wakefield, and later additionally in Pontefract. And flowing from this, the fight to defend jobs and services across the Mid Yorkshire NHS trust, including the battle against down-banding of the pay of medical secretaries in 2013 and the victory against plans to transfer some staff into a 'wholly owned subsidiary' last year.

Reading some of these accounts you sometimes want more detail of these struggles, which can be found in back issues of the Socialist.

One example of the problems caused directly by the new PFI hospital projects was at Pontefract. The new hospital opened in 2010 with inadequate rest facilities and staff told that their departmental fridges and kettles couldn't be brought in because they were 'health and safety risks'!

The book chronicles the reluctance of most local Labour politicians to rock the boat against the PFI proposals in Wakefield. Therefore it's welcome to hear from shadow chancellor John McDonnell that a future Labour government would seek to bring PFI contracts back in-house.

While this proposal hasn't been developed further, the final chapter of the book explores how this could possibly be done, coming down in favour of measures that would renationalise those contracts, suggesting this could be done via an act of parliament which could also decide on compensation. (The Socialist Party argues that compensation should be paid only on the basis of proven need - with none paid to the fat cats who made big money from PFI deals.)

But this is posed in a largely legalistic framework which doesn't go beyond the immediate issue of the PFI projects. But the question of public ownership of the banks seems to be posed as well, considering the Mid Yorkshire PFI contract was previously largely owned by RBS and now by an offshore arm of HSBC.

But linked to this is the question of mobilising throughout the trade union movement to make this a reality which, unfortunately, is not discussed - although undoubtedly Mid Yorkshire Unison will be at the forefront of taking this forward.

Nonetheless, this is a useful book for any NHS campaigner or trade unionist, particularly those fighting against the consequences of their own local PFI scheme.

Mid Yorkshire Unison branch should be commended for producing this resource.