Art exhibition: 'Unobtania' - a body of work by Peter Robson 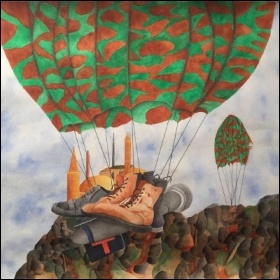 'Boots on the ground' by Peter Robson   (Click to enlarge)

A prodigal and returning north east son was warmly embraced in North Tyneside on 7 February. Artist Peter Robson's recent return to his home region has reconnected him with a social landscape which shapes his work and brought him into activity with North Tyneside Socialist Party.

There's an implied and omnipresent reference to the military industrial complex and horrors of war in many pieces. All are vivid, and offer sprawling views of larger-than-life protagonist subjects, like artillery, boots, and parachutes.

The evening exhibition preview at The Exchange in North Shields saw over 50 people enter throughout the night, with Peter on stage to give an explanation to the audience about his work.