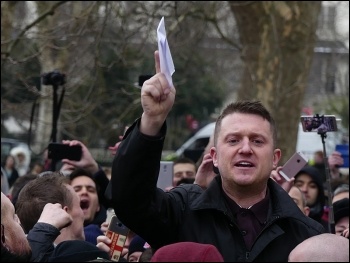 Supporters of Stephen Yaxley-Lennon, AKA 'Tommy Robinson', gathered at the BBC's Media City studios in Salford to protest against Panorama's documentary on his far-right activities on Saturday 23 February.

The BBC had planned an exposé of Robinson, believing an aggrieved associate of his could be trusted to gain them access. But she passed BBC footage to Robinson, who made his own film entitled 'Panodrama' to embarrass the BBC. The demonstration displayed this on a giant screen - though a poor-quality link made much of it unviewable.

A joint Media City workforce statement from the National Union of Journalists and technicians' union Bectu, issued in advance of the demo, denounced the intimidation, threats and violence of the far right, especially targeting photojournalists.

The Robinson crowd included EDL and Ukip supporters. Ukip's leader Gerard Batten spoke in support of Robinson, who he has taken on as an adviser to Ukip.

In the event, although much smaller than last summer's mobilisations in London, the pro-Robinson demo seriously outnumbered the counter-demo. This dangerous development makes it urgent for the trade unions to take charge and mobilise behind a clear programme to improve working-class lives.

Instead, organising was left to 'Stand Up to Racism', led by the Socialist Workers Party. As usual they provided plenty of speakers who told us we must oppose racism, but put forward no answers.

"Even for the people they pretend to support, the so-called white working class, they have no solutions.