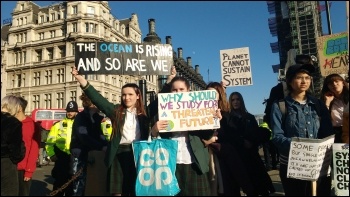 This environmental crisis has been caused by big business, which prioritises profit over anything else - including the planet and people's needs. Just the top 100 companies are responsible for 71% of all greenhouse gas emissions.

Such a movement, united on a programme for 'socialist change - not climate change', would be able to end the environmental catastrophe capitalism is racing toward.

A Labour government led by Jeremy Corbyn and John McDonnell should fight for policies that do not bend the knee to 'big oil' and the other major corporations responsible for pumping out greenhouse gases, but instead put people first.

Such a programme would require a socialist government taking the banks and major corporations into public ownership, under democratic workers' control and management. On that basis, we could fund the massive, immediate investment into green energy we need, and run the economy according to a sustainable plan of production based on people's needs - not profit.