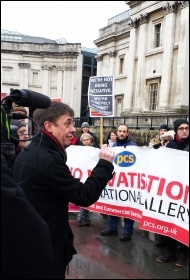 The PCS civil servants' union elects its assistant general secretary (AGS) every five years and its national executive committee annually. The ballot for these positions takes place 16 April to 19 May.

All three will be standing on a platform which includes:

Before his election as AGS in 2004, Chris Baugh was a leading rank-and-file left activist in the union for many years. He played a direct and major part in democratising the union and fighting the right wing.

Chris has successfully stood three times for re-election as AGS. He stands this time not only on his record as an activist but also on his achievements as AGS. These include green jobs and climate change, challenging discriminatory employment practices and helping to stabilise union finances following Tory attacks on check-off.

Chris is the Left Unity candidate in the AGS election. He faces a challenge from two other candidates, one a member of an ultra-left group and the other a non-Left Unity member and union full-time officer. The 87 nominations for Chris Baugh shows the widespread support he has among the union's lay activists.

They will fight for his re-election and that of the Democracy Alliance NEC slate.