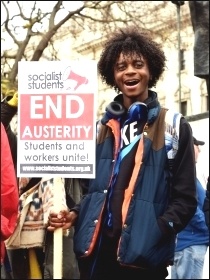 The Good Morning Britain weatherman made headlines with his passionate on-air interjection to the debate about the tragic rise in knife crime and resulting deaths. Over the years, the Socialist has reported from often emotional meetings of communities in response to violence on the streets.

So far this year, ten teenagers have already lost their lives in London as a result of knife crime. In response to these tragedies, people are rightly demanding action to keep communities safe. Theresa May has received a backlash for bluntly saying there is no link between police budget cuts and rising violence.

It is understandable, particularly with the growing number of young people who have lost their lives this year to violent crime, that working-class people want to see immediate measures to keep their communities safe. Some are calling for extra police on the streets in the hope of discouraging crime.

But measures like these can have a contradictory impact - sometimes making whole communities feeling criminalised rather than protected - especially with police powers like 'stop and search' which disproportionately target black people.

Last year, we said in the Socialist: "Some poor people can, in desperation, turn to crime and drugs to make a living. Decent jobs, housing and benefits can combat that. Young people who, when they think about the future, feel confidence that they will have a good home, job, pay and security for themselves and their family, don't tend to risk throwing such a future away by embarking on a life of crime."

But young people haven't just seen their opportunities at a decent future taken away by austerity and cuts. They have also seen youth centres closed, which in the past were community hubs and places where young people could find support.

We have seen schools privatised, handed over to academy chains, and now the numbers of students being expelled and excluded is on the rise. Staff in education have said they need resources to support students who are struggling.

But school funding has also been slashed and Socialist Students members report that schools feel like exam factories, with extracurricular activities like school plays being some of the first areas to face cuts.

Austerity is the message that profits, capitalism and this system are more important than the services we all rely on and the lives of working-class young people. That's why we need to fight for a socialist alternative.