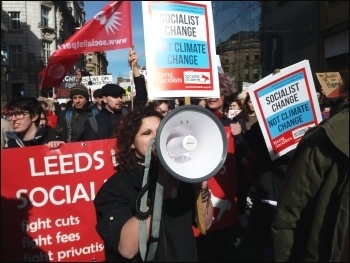 On 15 March, young people marched out of their schools and colleges and took to the streets for the second youth strike against climate change. The inspirational protests brought out tens of thousands of people across the country in a mass action repeated at over 2,000 sites around the world.

In Bristol, the strikers chanted "system change not climate change". The system change needed is socialist change. With just 100 companies responsible for over 70% of climate emissions, it is clear that big business is killing our planet. Capitalism's incessant drive for profit has been put ahead of even the future of life on earth.

Climate change is not the only threat to the future of the young protesters. Capitalism has left a wasteland of prospects. Low-paid, insecure jobs are becoming the norm, as is over-priced, privately rented housing. Those seeking a university education are being saddled with enormous debts.

The Tories' and Blairites' austerity programme has made this situation worse. They've deliberately picked the pockets of ordinary people, young and old, in order to give even more to their super-rich mates.

People are growing increasingly frustrated with the spectacle of parliament. Out-of-touch politicians are scrapping over the details of Brexit while the main issues facing people's lives go unanswered.

Theresa May could be forced into seeking a delay to Brexit, underlining her complete lack of authority. However, this government by the rich and for the rich has little prospect of bringing forward anything significantly different. While they remain in office, a delay will only prolong the arguments without answering any questions.

That's why we need mass action to force the Tories out. The youth strike is a great example and an inspiration to follow. Strikes of workers are even more effective, as they hit the bosses' profits. We're strongest when we stand together.

A coordinated series of strikes and protests could rapidly finish the Tories off. Corbyn should be using his position to make the call for such action and mobilise working-class people to fight back.

And we must fight not just the Tories, but also to end the profits-at-all-costs capitalist system that they support. We need a socialist alternative, where the wealth of society is owned collectively by the working class which creates it. Only then can the future of our planet and the people living on it be properly prioritised, as part of a democratic, socialist plan of the economy.

See recent editorial of the Socialist:

Only socialist planning can save the environment