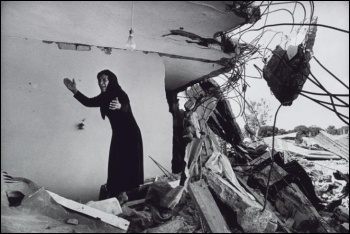 Being a legal aid lawyer, you are subjected to audits by all kinds of people. As it is, working a weekend allows you a day off mid-week and I took the opportunity to pop down to Tate Britain in south London. The reason for the trip was to see the retrospective on the photographer Don McCullin. It did not disappoint.

Don McCullin was born in 1935 into a poor working-class family in north London. He was forced to leave school at 15 in order to take a job to help the extended family. His father had died a few years earlier. He completed his national service as a photographer's assistant in the Royal Air Force.

However, his fortunes were to change when he visited the Observer newspaper with a picture of a gang called the 'Gov'nors'. They were lads he knew - he had gone to school with them, and he had asked them to pose for a photograph that was snapped up as that week the gang was allegedly involved in a murder.

Fortune had clearly favoured Don McCullin, but there is no doubt that fortune was seized by him - and he was then commissioned by the Observer to provide more pictures for the news bureau. Following that feature, he then travelled to Berlin to cover the beginning of the construction of the wall that secured him a long-term contract with the paper.

His commissions then took him around the world. It is that breadth and international scope that this retrospective covers. That good fortune marks the beginning as a war photographer and someone who is thrown into covering other human disasters.

From the mid-1960s to the early 1980s McCullin worked for the Sunday Times magazine when it was at the cutting edge of investigative journalism. During this period he covered Northern Ireland, the conflict in Cyprus and the war in Biafra, west Africa. Indeed one of the most haunting pictures is of an emaciated albino boy - when you see it, you'll remember it, and it will break your heart. Other conflicts covered include Lebanon - he was present when the Christian Phalange massacred innocent Palestinian women and children at the Sabra and Shatila refugee camp.

The retrospective has a series of thought provoking and impactful black and white prints from the US war in Vietnam, and its satellite conflict in Cambodia. The sight of a young father cradling his injured daughter is a powerful riposte to the warmongers of today and of yesteryear.

In 1981 Murdoch took over the Sunday Times and his impact was felt. The respected investigative editor Harold Evans resigned and his replacement Andrew Neil soon found an enemy in McCullin who questioned his integrity to independent investigative journalism - the type that McCullin was committed to. Soon after he resigned going onto work with other magazines and newspapers. He became a key member of the Magnum photo agency.

When commenting on his style and his photography, Don McCullin said: "Photography for me is not looking, it's feeling. If you can't feel what you're looking at then you're never going to get others to feel anything when they look at your pictures."

There is no doubt that his poor working-class background had provided Don McCullin with not only a sense of social justice, but also a real empathy with the subjects of his photographs. The walls are full of real sympathetic prose that supplement the humanity of his work. Well worth a visit.