Editorial of the Socialist, issue 1035

"Kicking the can down the road and brinkmanship" 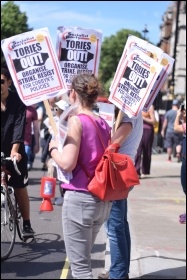 We need mass working-class action to push for a general election and not one day more of Tory austerity.

Ten thousand children woke up this morning in a B&B - not because they've been taken on holiday but because their family does not have a secure home.

Meanwhile, housebuilder Persimmon made profits of over £1 billion this year - the equivalent of over £66,000 profit on every home they sold. The profit on each house has nearly tripled since 2013. Almost half those homes were part of the government's 'help-to-buy' scheme, backed by public money.

Almost every school, 91%, is hit by funding cuts. Schools have a £5.4 billion shortfall. Teachers and support staff regularly buy food for hungry students as well as sanitary products and stationery.

So there is no basis for trust in this government - and that is before we get on to the Brexit mess in Parliament.

The EU referendum vote in 2016 was undoubtedly, at bottom, a revolt against the capitalist establishment and its austerity. That anger, for the above reasons and more, has not gone away but rages on.

But unfortunately, apart from the 2017 general election when we saw the enthusiasm for Jeremy Corbyn's anti-austerity manifesto, this anger has not been given a route for expression and certainly not an organised form.

We call for the trade union leaders and Corbyn to organise and build mass action to push for a general election and an end to Tory austerity. It's only ABC - 'Anything But Corbyn' - that keeps May in place and holds the warring Tory groups in any way together. But that can be shattered by mass action.

April Ashley is an elected member of the national executive of the million-strong public sector union Unison. She spoke to the Socialist in a personal capacity: "Trade Union Congress (TUC) general secretary Frances O'Grady is supposed to represent working people.

"But I saw her sitting cheek-to-cheek with the head of the CBI bosses' union talking about Brexit as if we have common interests! The CBI bosses are responsible for driving down our living conditions in order to maximise their profits!

"The TUC should be calling us onto the streets to demand a general election. Only a left, Jeremy Corbyn-led government - campaigning to end austerity and for a workers' Brexit - is in working people's interests.

"No deal that the CBI or the Tories support will benefit us and end austerity. O'Grady needs to act for us - not get into bed with the bosses!"

As we go to press, the repercussions of the latest May defeat - for MPs to have indicative votes on various options - are reverberating around Westminster. The government spoke and whipped against this proposal, which came from former Tory cabinet member Oliver Letwin and Labour right-winger Hillary Benn, but lost it nonetheless by 27 votes - 302 to 329.

The indicative votes on proposals, that could include revoking Article 50, no deal or a second referendum, are scheduled for 27 March and 1 April.

The indicative votes on proposals, that could include revoking Article 50, no deal or a second referendum, are scheduled for Wednesday and next Monday 1 April. This has been reported as MPs seizing control of Brexit - but a way out of the morass is unlikely to come out of this, and one in the interest of working-class and young people remains ruled out unless a general election takes place, with Jeremy Corbyn fighting and winning it on the basis of a socialist programme.

Does the word 'historic' apply to this latest defeat in a situation where government defeats, cabinet resignations (three this time), rebellions (29 on the Tory side) and paper-thin denials of leadership challenges (two so far) are the new normal? Does it apply when the chancellor refuses to rule out a second referendum in defiance of what the prime minister has said? As Guardian journalist Rafael Behr moaned: "In Brexitland, the unprecedented no longer feels extraordinary."

Kicking the can down the road is combined with constant brinkmanship as May tries to corral MPs into backing her deal by threatening ever worse scenarios if she is not supported - with the ultimate threat always being a Corbyn-led government.

But a general election is posed inherently in this situation. Every parliamentary vote reveals the utter lack of confidence in May and the government. The Tories are splintering, unable to share a view of the way forward. May is asked to commit to stepping down in return for support.

No confidence in May is clear - and a vote of no confidence in her government could confirm that at any moment, triggering steps towards a general election.

A Downing Street spokesman told the Guardian: "We really, really don't want a general election" but cabinet members are reported to have 'war-gamed' scenarios for a general election should MPs impose a Brexit outcome that May cannot accept.

"I've seen better cabinets at Ikea". This slogan can be found on protests on many different issues. It was there on the huge 'put it to the people' demo on 23 March.

The joke reflects something very serious - there is an enormous crisis of legitimacy in parliament now as well as in all the institutions of capitalism.

This ultimately reflects the 2007-08 world economic crisis, from which capitalism has not fully recovered. They have no solutions to the problems faced by workers and youth because they act in the interests of the bosses.

In austerity Britain it takes less than three days for the average FTSE 100 chief executive to earn the average worker's annual salary. The top bosses average £4 million a year, while the average salary is less than £30,000. Millions live on half that or less with zero-hour contracts and precarious conditions making life a nightmare.

In an expression of the lack of trust in parliament to overcome this impasse, a million marched on the 'Put it to the People' demo, and five million signed an online petition to stop a no-deal Brexit.

Millions fear the uncertainty of Brexit and the impact it will have - reducing already falling living standards further as we pay for the crisis. While there undoubtedly is scaremongering involved, a no-deal scenario would create further chaos. And as Honda has shown, the bosses will use the cover of Brexit to push through job losses, closures and other attacks on workers' conditions.

That is why the approach of the Honda workers needs to be emulated - organising resistance and building solidarity and support. Ukip and Nigel Farage's 'Brexit Betrayal' march has so far not picked up widespread support. But its plans for further protests are a warning that the right will attempt to offer a lead to those who voted Leave and feel ignored by parliament and who are suffering austerity.

When Corbyn met May on 25 March he was accompanied by Keir Starmer the shadow Brexit secretary. Instead, he should have brought representatives of the six-million-strong trade unions. They should have threatened mass action - demonstrations and strikes.

Determined mass action would be very effective in showing workers and young people that there are solutions and alternatives to the mess of the capitalist establishment. A bold socialist programme for a Brexit in the interest of workers, and based on internationalism, could win a majority and cut through the confusion.

Corbyn was in Morecambe on 23 March campaigning against local government cuts. Lancaster council's funding has been slashed from £15 million to £6 million. But the 125 Labour-led councils in England, Scotland and Wales hold around £14 billion in useable general fund, housing and capital receipts reserves.

If they were to reject the Tory cuts and set budgets based on need, using their reserves and borrowing powers to fund it, mobilising a mass movement of working-class people behind them, it could finish off the Tories and their austerity agenda.

A clear pledge from Corbyn and Shadow Chancellor John McDonnell that an incoming Labour government would replenish any reserves a Labour council used to avoid cuts would give confidence to those Labour councillors.

Many workers feel frustrated that this has not been the clear line from Corbyn. But if he put forward a manifesto along these lines and approached it boldly it is possible that we could see a Corbyn-led government in the near future.

When Tom Watson spoke at the 23 March demo he echoed David Cameron and George Osborne when he said "the way to solve this crisis is to recognise we're all in it together." What they meant was that workers should pay for the bosses' crisis.

Watson's speech was a warning of the role he is playing now and will play under a Corbyn government - of fighting on behalf of the bosses.

So the other vital preparation that is needed for a general election is the deselection of him and all the Blairites as a step towards the transformation of Labour into the mass workers' party we need to fight austerity and for socialism.