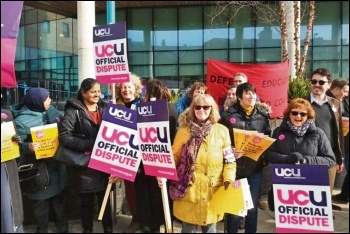 University and College Union (UCU) members at Bradford College were out in force for the latest round of action over pay in a number of colleges across England.

Over 30 pickets gathered outside the college's flagship David Hockney building, a testament to the money that management has thrown at new buildings while restraining pay for staff.

The college is in crisis, having gone through four different CEOs over the last year, with staff increasingly despairing of the future of the further education sector. But this chaos is also making pickets more determined, as what they see at stake is the existence of such educational provision.

While management at Bradford seem intransigent on the pay issue, increasing numbers of other college managements are being forced to back down to the demands of striking UCU members.

Sheffield UCU branch committee and Socialist Party member Sam Morecroft was one of those who addressed the picket line, bringing solidarity from his UCU branch, along with a donation to the strike fund, and demanding college management open the books so staff can see the full extent of their mismanagement.

This latest three-day action will continue to up the pressure on college managements. But it is vital, given the small numbers of UCU branches in further education that were able to overcome the undemocratic 50% turnout threshold, that other UCU branches and the wider trade union movement mobilise full support.