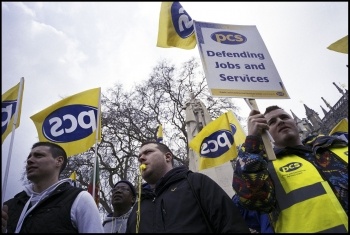 PCS civil servants' union members at the HMRC Ealing Office (International House) in west London had a successful half-day strike on 19 March. Almost all staff walked out at 12 noon in protest at the plan to close the office as part of the misnamed 'Building our Future' programme.

One PCS rep told the Socialist: "It should be called destroying our futures! Many staff in International House have already been redeployed to Ealing after an earlier office closure. They have to commute to get to Ealing, an onward journey to the new office in Stratford will be well outside reasonable daily travel. There is also a significant proportion of staff with disabilities and caring responsibilities - making it impossible for them to travel to Stratford. Ealing is already the last stop for our members. If this office closes our members will be out of a job".

The cuts in HMRC have been relentless. Tens of thousands of years of tax experience has been lost as a direct result of office closure plans. The 'Building Our Future' proposals will see 90% of HMRC offices closed and replaced by fewer than 20 'regional centres and specialist sites'.

As part of these proposals the International House in Ealing could close as early as 2020, putting many of the staff at risk of redundancy. The Ealing campaign needs to be part of a campaign of protests and industrial action across HMRC to stop the office closure programme, defend members' jobs and the service they provide.