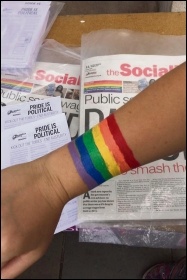 The Socialist Party was invited to participate in a debate on the Gender Recognition Act hosted by a London Constituency Labour Party.

The forum, on 16 March in Tottenham, was organised as an attempt to get beyond the toxic atmosphere that has surrounded the Tories' proposals to review the 2004 Act.

The Socialist Party defends the right of trans people to self-identify and argued for the trade union and socialist movement to develop an independent working-class approach to fighting for trans rights based on solidarity.

When I spoke, I argued to reject the idea put forward by others there, that the different groups facing special oppression under capitalism must fight each other for rights and resources.

Unfortunately speakers from trade unions and the Labour Party are seeking shortcuts to women's liberation without a struggle. This is a dead end and will not win.

We need to fight for the maximum unity of the working class in struggle against cuts, on all our services, and capitalism, that is based on inequality.

The trade unions, as the largest organisations of the working class, can and have played a key role in the fight for the rights of those who suffer oppression and discrimination under capitalism.

About a dozen Labour Party and trade union members signed the Women's Lives Matter petition. The petition appeals to shadow chancellor John McDonnell to guarantee that an incoming Labour government would replenish any reserves a Labour council used to avoid cuts to domestic violence services and refuges now, and underwrite borrowing made for the same purpose.