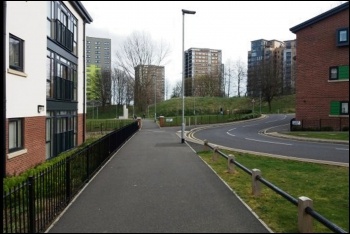 An angry public meeting in Leeds - called by the Little London Tenants and Residents Association - discussed the proposal to build an 18-story block of private flats on a small green space.

Little London is near the city centre so developers are keen to build. The area already has nine tower blocks, and there are very few open spaces.

The development would require the removal of 51 trees. These absorb carbon dioxide from a nearby busy road.

The land is owned by Leeds City Council. The meeting called for the council to oppose the development and not to sell the land.

To his credit, the local Labour councillor present at the meeting, Javaid Akhtar, said he opposed the scheme.

However, the Labour-controlled council leadership has been selling off plots of land it owns to private developers.

Its strategy in the face of year-on-year cuts from central government has been to prioritise developing the city centre as a 'destination', hoping to plug the finances with increased business rates. But these have largely been illusory.

The working class has borne the brunt of austerity. In its February budget, the council agreed above-inflation rent rises for tenants in Private Finance Initiative (PFI) built properties. Many are in Little London.

The Socialist Party believes that the council should be fighting the cuts instead of implementing them.

The alternative no-cuts budget drawn up by Leeds trade union council this year would be an excellent place to start.

That's why we'll be standing local resident and Socialist Party member Michael Johnson as a Socialist Alternative candidate in this ward in the 2 May local elections.

And Socialist Party members joined activists in the tenants and residents association to door knock on 23-24 March to encourage everyone to make their objections known to the council.