Enthusiastic Southern region Socialists plan for the struggles ahead 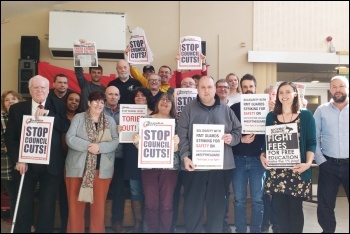 Our campaign of opposing all cuts struck a chord with many voters. The Socialist Party is proud of Sue's achievement and it puts down a marker for the future.

There were members from Aylesbury, Basingstoke, Bracknell, Oxford, Reading and Southampton at the 24 March meeting.

The mood at the meeting was confident and optimistic. In a number of areas, our members are doing sterling work boldly putting forward the socialist alternative to austerity, cuts and privatisation.

Elsewhere, we are fighting to defend the NHS, play a key role in the union fightback and Socialist Students has backed the school student walkout over climate change.

Members responded with a magnificent finance appeal to fund and expand our work in the region. The collection raised £856.