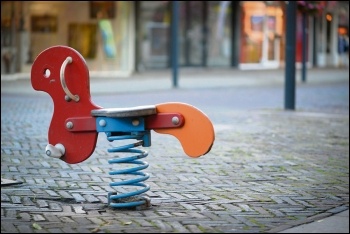 Social tenants are forced to use separate playgrounds   (Click to enlarge)

Haven't the Tories and Blairites got enough to answer for without barring poor children from playgrounds? An investigation by the Guardian has showed yet another side of life under the 'Nasty Party' and its shadows on the right of Labour.

On 30 March, the liberal daily announced: "Segregated playgrounds revealed: 'We just play in the car park'." The 'poor doors' scandal has not disappeared, but grown.

As well as separate play areas for the children of social tenants and private owners on some estates, further investigation has found segregation of shared-ownership residents, and even pregnant social tenants forced take the stairs because the lift only stops on private floors!

One tenant in Streatham Hill, south London, said: "I'm actually glad I don't look over the gardens: how would I tell my children that they can't play there because I don't have a fat bank balance?"

This followed an exposé of another such estate, just ten minutes' walk over Lambeth Bridge from the Houses of Parliament.

Multimillion-pound property developer Henley Homes was required to include some 'affordable' flats for rent in its 2016 redevelopment of Baylis Old School in the south London borough of Lambeth. Social tenants were told common areas were for all residents.

But after the Blairite council granted planning permission, designs changed to bar poorer kids from the communal areas open only to private renters and owners.

Within days, Henley Homes denied there was a ban. "However," reported the Guardian on 27 March, "residents from all parts of the site, both private and social, spent months asking the housing management companies and Lambeth Council to open up access to all children."

All these housing developments are in Labour boroughs, under the Labour-led Greater London Authority and Sadiq Khan. The reality that right-wing Labour mayors and councillors have been cosying up to big landlords and developers seriously undermines Labour's credibility in the eyes of many.

While the Guardian only reports on problems, the Socialist is concerned with solving them. Jeremy Corbyn must stand up for poor and working-class tenants against these powerful interests.

He should start now by ordering Labour councils to begin a mass programme of council home building, based on reserves and borrowing, to be underwritten by a Labour government in power. He should pledge a Labour government to a socialist housing policy, bringing the big property and housebuilding firms into public ownership under the democratic control and management of housing workers and residents.

And he should kick out the money-grubbing Blairites responsible for this mess. Mandatory reselection of all elected offices in the Labour Party and a democratic collective voice for trade unions are essential as part of democratising Labour.