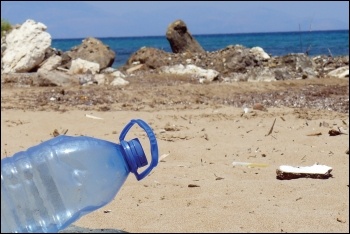 Low oil prices can make it cheaper for capitalists to make new plastic than to recycle, photo (public domain)   (Click to enlarge)

Marine plastic pollution costs the world up to £1.9 trillion a year, a report published in the Marine Pollution Bulletin suggests. There is a 1-5% decline in the benefit humans can gain from the ocean.

This study, the first of its kind, assessed the economic and social impact of marine pollution. It shows that the negative impact pollution has is often underestimated.

But what this study does not show, however, is the threat posed to marine life or human health by the eight million tonnes of plastic that enters our oceans every year.

The report makes it clear that the situation cannot continue and something urgent must be done to protect our oceans and reduce pollution. Plastic pollution is one of the biggest environmental threats we face. It can enter the stomachs of marine wildlife, either choking or killing them, or enter the human food chain if swallowed by wildlife that people consume.

Following public outrage on this issue, the government has attempted to grab headlines with small measures to supposedly address the problem. For example, there is a plan to ban single-use plastic straws in the UK.

However, small steps such as this, and governments encouraging individuals to recycle will not be enough to tackle this huge threat. Under capitalism, corporations will always seek the cheapest and most profitable option in production.

Economic environmentalist Nicola Beaumont states: "Recycling a ton of plastic costs us hundreds, against the cost of thousands if we let it into the marine environment."

But big capitalist companies see only short-term profit, and not the big picture. In many cases, it is still cheaper to produce new plastic rather than recycle existing plastic products. In a system that puts profit over people, the capitalists will always prefer this option.

Only 56% of plastic produced is currently recyclable. A democratic, socialist planned economy - where nationalised industries are under workers' control, and production is taken out the hands of the capitalists - could produce sustainable and environmentally safe materials.

The worldwide climate strikes show that young people understand the massive threat posed to the environment by pollution and climate change. There is an urgent need for mass action to demand change that goes far further than what capitalist governments have proposed so far.

To escalate the climate strike movement, Socialist Students says student unions should be set up in schools and colleges to democratically organise the next steps.

Students on strike can link up with the trade unions, which represent more than six million workers. Through strike action, the working class has the power to bring society to a halt.

To really protect the environment, we need to radically change the system and fight for a socialist transformation of society.