Socialist Party mayoral candidate in Leicester, Steve Score, has written to candidates in the council and mayoral election on 2 May to ask if they would be prepared to support a no-cuts budget. The letter shows how this is possible. Every Socialist Party candidate supports it. We believe there are also some left Labour candidates who agree with it, we hope they will they publicly support it.

Around 40 Socialist Party candidates are contesting this year's council elections in England under the electoral name of Socialist Alternative. 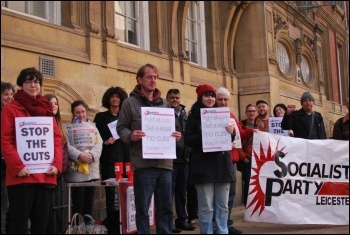 The government has drastically slashed the funding it gives to councils. Leicester City Council's figures show a decrease in government grants from £289 million in 2010 to £171million in 2019. This is at a time when social care costs have risen significantly. Leicester's Labour council and executive mayor have complied with these cuts.

With more cuts planned by the council it will mean a 62% cut in services over ten years (excluding social care).

This cannot go on! These cuts have particularly hit the most vulnerable. When homelessness is rocketing, hostels and homelessness services have been cut and council house building has been almost non-existent.

We believe there has to be resistance. It is possible to set a legal no-cuts budget, using reserves and prudential borrowing powers.

The council has a "managed reserves strategy" which has effectively meant cutting spending by more than necessary to balance the budget in previous years in order to partially reduce the level of cuts in later years. Under current plans this will be gone by 2020.

But it also has "earmarked reserves" of £166 million. Of these some £35 million is "ringfenced" for purposes such as health and education spending. But some of the remaining £131 million could be used to prevent cuts while maintaining a balanced budget.

Clearly this strategy can only be temporary. What is key is that it would buy time in order to build a massive campaign to force extra funding from the government. If the council led a campaign that went to the people of Leicester to ask their support to defend local services, and went to the council workforce to ask for their support to defend jobs and conditions, a huge groundswell could be created.

The campaign to save the Glenfield Children's Heart Centre was successful because it had massive support and got the active involvement of large numbers of people. Imagine the impact of a campaign led by the council which was able to link up with other councils around the county in a similar position.