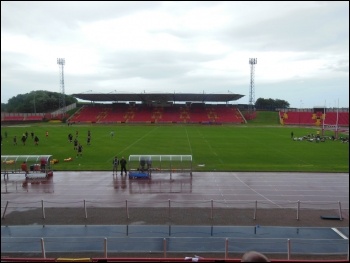 At the home match of Gateshead Football Club on 6 April, fans - including away supporters from visiting Ebbsfleet United - protested outside Gateshead FC stadium over the existential crisis facing the club. The club faces mounting debts and has seen its squad reduced to just 16 players.

Ebbsfleet supporters know only too well about the financial problems of clubs playing in the National League, having suffered a similar crisis this season.

'Gateshead Soul' had been set up by supporters to not only raise awareness of the club's plight but to actually save it from extinction.

Fans' anger has been directed at the club's financial adviser Joe Cala, who is believed to be pulling the strings. Cala didn't show his face at the match on 6 April.

Former Rochdale owner Chris Dunphy has agreed in principle to take over the club but the necessary paperwork has reportedly not been signed off by current Gateshead FC owner Dr Ranjan Varghese.

As ownership of the club has failed to be resolved, players and staff have been left unpaid. Players have also been locked out of the stadium, unable to train and only allowed in on match days!

If we allow these 'gangsters' to continue to 'slash and burn' our cultural heritage where does it stop? Socialist Party members have suggested Gateshead Soul organise a protest in the town centre and have also raised the possibility of fans' ownership of the club.