On 1 April 1999, Tony Blair's government introduced a minimum wage. It was one of the very few pro-worker steps taken by a right-wing Labour government which otherwise betrayed working-class people with privatisation of housing and public services, and war.

It was opposed by the Tories when it was first introduced and there were howls of protest from bosses who didn't want to eat into their profits.

The Low Pay Commission, an 'independent' body made up of employer and trade union representatives and 'experts', recommends the level of the minimum wage and, on 1 April this year, published a report of its achievements after 20 years.

The commission is proud to report that the minimum wage has boosted pay by £5,000 a year for low-paid workers, affecting seven million people.

They also boast that the minimum wage has gone up each year at a faster rate than other wages. However, the report can't avoid admitting that this achievement is basically because ten years ago the world economy suffered a financial crash, followed by a concerted effort by the bosses of big business and the banks to ensure that the working class paid for that crisis through austerity.

Wages are still below the pre-crisis level and according to the Office for Budget Responsibility are not likely to get back to that level till 2023 - making it fifteen lost years. Workers are suffering the longest pay squeeze in over 200 years.

Just three days before this minimum wage report, new figures for in-work poverty were released. It is at a record high. After housing costs, 57% of people living in poverty are in a working household. For children, that figure is 70% - 2.9 million. What an indictment of capitalism.

In-work poverty is worsened by the cap and freeze on in-work benefits. The Joseph Rowntree Foundation says the benefits freeze has dragged an additional 200,000 people into poverty since 2016.

The Socialist Party welcomed the introduction of the minimum wage, but it is clearly not enough. We call for and strive to achieve mass trade union struggle to end austerity, and for better pay, terms and conditions of work for all.

Inspired by campaigns of low-paid workers in east London, for example at Whipps Cross hospital led by Socialist Party member Len Hockey, in 2003 a voluntary London Living Wage was introduced, followed with a Living Wage for the rest of the country in 2011.

In 2013-14 the Socialist Party launched a campaign for a £10-an-hour minimum wage, inspired by the fight for $15-an-hour in Seattle in the US. This demand chimed with many and was taken up by groups of workers and trade unions. 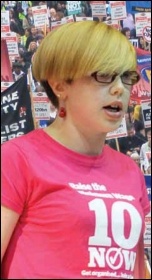 Socialist Party members raised the demand in the Fast Food Rights campaign and it was fought for by the National Shop Stewards Network. The bakers' union BFAWU adopted the demand for £10 and took it to the Trade Union Congress conference, where it became policy.

More and more groups of workers started to fight for £10 - and some started to win it. Most famously, McDonald's workers took part in strikes and won increased pay - including an increase to £10 an hour for some staff members.

This groundswell provided the push for Jeremy Corbyn's Labour manifesto in the 2017 general election to make the popular pledge for £10 an hour by 2020.

The Socialist Party still supports the £10-an-hour minimum wage demand, with no exemptions - but as an immediate step towards a real living wage.

A big change since the minimum wage was introduced has been the growth of precarious work - zero-hour contracts, self-employment, and the so-called gig economy - as, in this period of crisis, bosses seek to maximise their methods of exploitation, aiming to achieve the ultimate 'hire-and-fire' workforce. Nearly four million workers work in this insecure way.

Workers in this precarious economy have increasingly got organised and fought for better conditions - for workers' rights, for holiday pay and sick pay, for payment by the hour, to keep control of their own tips and so on.

Groups of workers with little trade union knowledge have gone on strike and protested, learning quickly what a union is, and how to conduct a campaign - in some cases through small independent unions, in other cases in battles taken up by the bakers' union, the RMT transport union, civil servants' union PCS and general unions GMB and Unite.

Because of the nature of precarious work and the complexity of working conditions, it is essential that demands for workers' rights for all from day one, and to scrap zero-hour contracts, run alongside the demands for a decent living wage. We also demand a working week of no more than 35 hours, with no loss of pay.

A higher minimum wage will always be opposed by bosses claiming they cannot afford it, and threatening to lay off workers or increase their prices. Really what they mean is they want to keep their profits.

We say, open the books! If any large company refuses to implement an increased wage or threatens to lay off workers it should be taken into public ownership so that decent jobs can be guaranteed and skills preserved.

For small businesses, however, if they would genuinely struggle to pay a higher wage, they should be eligible for assistance from public funds. Tax the super-rich to pay for it!

We have to link the wage demand to other demands which reduce living costs - especially in housing, transport and childcare - and a programme for job creation.

There is enough wealth in society to provide a minimum wage that could give everyone not just a minimum standard of living but comfort and security.

But under capitalism there will always be a struggle between the workers and the bosses, the capitalist class, over the share of wealth produced. Since the economic crisis, while workers have faced vicious austerity and increased poverty, the richest in society have more than doubled their wealth.

This struggle will continue until a powerful enough workers' movement, with a mass workers' party, takes society into its own hands, nationalises the main planks of the economy, and plans and organises society on a democratic socialist basis.

This would not only ensure good wages, but would also enable the creation of good, socially useful, green jobs.

The charity Trust for London estimates that, depending on the kind of household, it costs between 15% and 60% more to live in London than elsewhere.

Four in ten Londoners don't reach even the Minimum Income Standard - an amount worked out by the Centre for Research in Social Policy based on what the public generally consider an acceptable minimum standard of living. That's 3.6 million people. In the rest of UK it's three in ten - bad enough.

Nonetheless, at £10.55 an hour, the current level of the London Living Wage is not enough. This is illustrated by the fact that in Inner London, the lowest pay in local government is now £11.31 an hour.

Several groups of low-paid workers have fought for more than the current level. In the summer of 2017, workers at the Barts hospital trust in East London, already on the London Living Wage, fought a big campaign for an increase.

Some groups of workers are already testing out demands for this level of pay. The idea of £15 an hour has been met with enthusiasm by many workers and trade union members when it has been discussed.

Going from £10.55 to £15 would be a 42% increase. Undoubtedly, bosses would scream that they can't afford it. But why not aim high? What is achievable is decided by the struggle. The victory for a $15-an-hour minimum wage in Seattle represented a massive transfer of wealth and was a 50% increase on the US federal minimum wage.

The Senior Salaries Review Body recommended that judges get a 42% increase. Why is it so outlandish to demand that low-paid workers should have the same?

£15 an hour, after tax and national insurance, would achieve the Minimum Income Standard for a family.

In 2020 the elections for the London Mayor and Assembly take place. We want to raise £15 as a demand on Labour Mayor Sadiq Khan. Under Corbyn's Labour, the London Living Wage should be set at a level that means people really do move out of low pay. We demand the same of every Labour council, and of Transport for London.

Not only would such a campaign help to oust the Tories as soon as possible, but if Jeremy Corbyn and John McDonnell were to pledge that an incoming Labour government will underwrite any debts incurred, it would mean councils and the Greater London Authority could pay a £15-an-hour London Living Wage right now.

What would it mean for a minimum wage worker?

A London retail worker says: "£15 an hour might seem like a big jump from the current dismal minimum wage. However, to myself and other low-paid workers it would make a huge difference.

"Many low paid workers currently do two jobs just to get by. £15 would ease the worry about not being able to pay the rent, or being forced to live in substandard housing as that's all we can afford. It would stop the constant budgeting of every penny. It would mean that many of us would feel we could start a family without the fear that we cannot afford to! We all deserve to earn a wage we can actually live on."

What could it mean for a salaried worker?

National Education Union general secretary Kevin Courtney told the Times Educational Supplement: "There are newly qualified teachers who tell us they've worked out how many hours they've worked in a week, and they've divided that by the amount of pay they get per week, and they've come up with numbers which show they are slightly - only around 10% - above the minimum wage with their hourly rates."

A £15-an-hour London Living Wage demand - especially if some groups of workers started to win it - could inspire salaried workers like teachers to fight for better pay increases themselves.