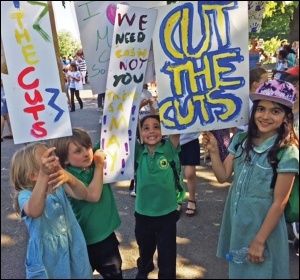 Deregulation and privatisation has fuelled this crisis. But at its root is a funding hole that has tipped schools over the edge. Real-terms funding per child has fallen by 8%.

Our school, Valentine primary, is open during the Easter holidays to feed children and families and provide food parcels for those who can't make ends meet. And we will be open for 'Easter school' to prepare year six children for the onslaught of SATS tests.

It is the perfect storm of devastating austerity and its impact on working class families. Alongside this, support services have been cut to ribbons and schools are judged by an intense testing regime and league tables.

All of this has pushed teachers beyond the limit at a time of excessive workloads and falling wages.

Exclusion levels have hit the roof. As the funding squeeze hits, teaching assistants on temporary contracts are made redundant, class sizes rise and the teachers are left struggling to meet the needs of all their children.

Children with special needs, instead of getting the support they need, are seen as part of the problem. Increasingly, they are taken off-roll, excluded or resort to truanting. These are the brutal consequences of cuts.

Here at Valentine school, over 100 teachers and parents met to tell our local politicians, "Enough is enough. Find the money or we will go on strike." They didn't but we did. We stood on the picket line together with parents, children and campaign supporters.

May's council elections give Jeremy Corbyn a critical opportunity to call on Labour councils to use their powers to protect school budgets.

Southampton parents and campaign supporters at our school are supporting anti-cuts, socialist candidates to boost support for our campaign and to increase pressure on our Labour councillors to deliver the vital funding, using reserves and 'licensed deficits', and support our school's needs now.

It is essential that the National Education Union steps up its campaign. The indicative national ballot must be built on to deliver national strike action on funding, pay and workload.

Rallies and demonstrations can mobilise our members and build support. This is a decisive battle line against a weak and divided Tory government. We can win.