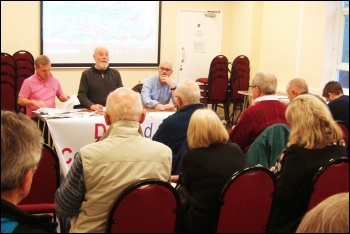 Patrick Young from Unison union gave a good presentation with many useful statistics. For example, in Bracknell the average first-time buyer's house price in 2017 was £285,828, requiring a 15% deposit of £42,874. In the case of an NHS cleaner this would be 13.9 times their salary.

Clearly, house purchases are out of the question for many young people living in our area. A similar situation applies to renting. Very few council/affordable dwellings are available, but all around our area luxury houses and flats are being built.

Niall Mulholland, Chair of the Social Housing Action Campaign (SHAC) spoke about its work in London. SHAC links the housing associations, housing co-operatives and Unite the Union activists, to help in fighting the problems faced by tenants and residents.

Niall talked about the changing role of some housing associations who now sell properties and have highly paid chief executives.

As chair of Bracknell Defend Our Community Services I outlined the aims of the East Berkshire and Reading housing campaign.

More meetings were planned around the area, and people were urged to sign our petition and join our campaign.

Speakers from the floor highlighted the problems many local people face with unaffordable rents and mortgages.

With local elections looming local council candidates should be quizzed about their policies to increase council housing, as very few are being built.

A collection of £50 was raised for future activities and room costs and it was agreed to continue and develop the campaign, building on this successful meeting.